Us tech folks do not like bloat. Not when it comes to the operating system we use, but also not in the software that we use on the computer. Google Chrome up until now was a slim fast web browser. Sure, it lacked a few features but the rapid development pace of the Chrome development team added new ones all the time.

The dev team may have gone overboard with the latest additions to the latest Chrome 10 Dev released (see How To Remove Elements From Google Chromeâ€™s New Tab Page). What happened? Google seemed to have started to like the idea of changing the default Chrome new tab page. First it was an advertisement for the Chrome OS Netbook which somehow cannot be hidden permanently, which in itself is ridiculous considering that it is shown to users from all over the world but only users from the US can apply for the beta test.

The latest addition is the apps section which is linked to the Chrome Web Store. The Chrome web store offers applications and games that can be installed and used. Google now thought it would be a good idea to ship two games with the Chrome browser. 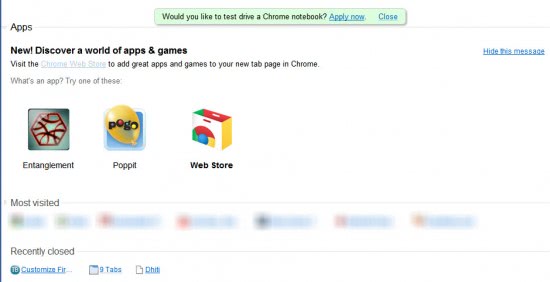 Games? Yes, that is right. There is no prompt if the games should be installed, they are simply there. And while it is possible to uninstall them, it is likely that a lot of Chrome users find this behavior unacceptable.

I personally have another objection to this. It is bad enough that there is no dialog that asks the user whether those games should be installed or not. Even worse is the precedent that this could be. What if Google adds a trial for an application or game the next time, or an inappropriate application?

There does not seem to be a control available to block the behavior. On the other hand, this is only available in the dev version of the Chrome browser as of now. It will be interesting to see if the developers add the games to the beta and release versions of the browser as well.