Advanced session management is something that Google's web browser lacks currently. The only option that is provided is to open the tabs that were open in the last browsing session.

There is however no option to save a session to open it at a later point in time, for instance when the browser crashes and a restart only displays the start page and no websites that were open previously.

While you can try and open the last three open browser windows using the Chrome History, this too does not work all the time.

That's what the Session Manager extension for Google Chrome does. It enables you to save the current browsing session so that it can be loaded again at a later time. All the relevant information will be saved so that it can be started exactly the way it was when the session was saved.

The extension places a new icon in the Google Chrome toolbar that provides you with direct access to saving and restoring sessions.

A click on the button reveals a menu that displays the currently stored sessions, the ability to save the current sessionm and options to rename, load or delete sessions that have been saved previously. 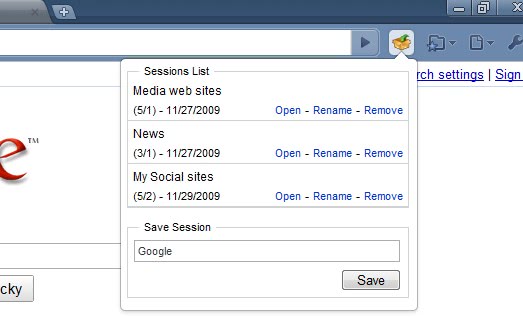 To create a record of a session, simply type in a name and hit the save button afterwards to do so. The extension records the number of tabs and windows that were open in each session, as well as the datae it was saved.

The name acts as an identifier, and it makes sense to pick descriptive names such as work, entertainment or social when saving sessions so that they can be identified easily later on.

Saving sessions can be interesting for several purposes. It can be useful to return to a browsing session at a later time, for instance as a safeguard against browser crashes.

Specific purposes include creating groups of websites, e.g. news, business and computers, that can be opened together. Another use might include research or business related sessions that open websites that are always relevant for the job.

Last but not least, you can also use it as a backup of your current session, so that it can be restored no matter what happens in the meantime.

The extension is compatible with all versions of Google Chrome. Firefox users might want to look at the article "10 useful firefox add-ons" which includes a session manager for their web browser as well.

Martin Brinkmann is a journalist from Germany who founded Ghacks Technology News Back in 2005. He is passionate about all things tech and knows the Internet and computers like the back of his hand. You can follow Martin on Facebook or Twitter
View all posts by Martin Brinkmann →
Previous Post: « Watch Youtube Movie Trailers on IMDb
Next Post: Readability Redux Extension for Google Chrome »