Compared to Linux, it is extremely difficult to customise the appearance of Windows. The most popular, and definitely the most effective, piece of software is Stardock's WindowsBlinds, which allows Windows to be skinned.

Thousands of skins are available, ranging from Star Trek-themed ones, to OS X-themed ones and even to superhero-inspired ones! Whilst changing the appearance of Windows has little functional benefit, it makes a computer feel less impersonal and companies can use skins to reinforce their identity.

The software does have its disadvantages. Firstly, it takes up system resources (Stardock claims that the system it runs on must have 256MB RAM at minimum), secondly, some skins are terribly buggy and thirdly, it is not free.

The software's most basic package costs $19.95 (about Â£11 or â‚¬14) but Object Desktop Ultimate, a complete solution which also includes several other tools and free upgrades for a year costs $69.95 (about Â£30 or â‚¬50). 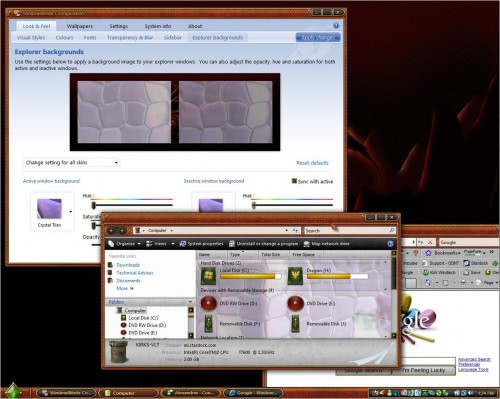 Update: WindowBlinds is still regularly updated and as a consequence fully compatible with recent Microsoft operating systems. The price of $19.99 has not changed but users of older versions of the program can upgrade for $9.99 to the latest program version. A 30.-day free trial version is available that you can make use of to test the ins and outs of the program before making a buying decision.

Object Desktop, which includes a total of 15 different programs including WindowBlinds, is available for $49.99 now, about $20 less than it cost in 2008.

You can browse the available themes to find out which themes are available when you install the program. Some of the themes cost extra, while the majority are free to download and use. Simply download the themes to your local system and import them into WindowBlind to preview and install them on the system.