Microsoft Online Crash Analysis is a website put up by Microsoft to aid users in investigating crashes, bluescreens and stop errors. Part of the service is the Windows Memory Diagnostic software which is a standalone tool that can scan the computer memory and report on errors it found.

Windows Memory Diagnostic (link) is a dos tool which has to be installed on a floppy drive or CD. It can only be run during system start and not from within Windows. Many users will feel uncomfortable with this procedure but those affected by crashes might probably be inclined to try everything in their might to get to the reason of the crashes.

The tool will start the computer memory check instantly after its interface has been loaded during system startup. It will run test passes and it is important to perform at least one full test pass before quitting the software program.

The first test pass is the most important one. If no errors are found it is unlikely that additional runs will find errors. If errors are found you discovered a possible source for the system crashes, bluescreens and stop errors. 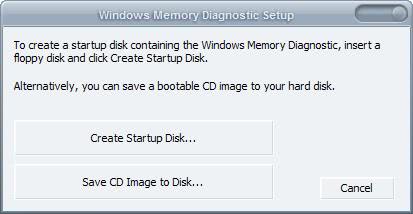 The installation should not pose difficulties for anyone. Buttons to create a startup floppy disk and to save a CD image to disk are provided upon execution. The first will create a bootable floppy disk containing the Windows Memory Diagnostic tool while the latter will create in ISO image windiag.iso that has to be burned to CD or DVD.

An alternative to Windows Memory Diagnostic is Memtest86+ which is highly recommended by computer professionals to check ram of computers. It has also be burned to CD and run during system start.

Update: The website is no longer available. It is not clear yet if Microsoft has pulled the Online Crash Analysis website from the web or if it is being updated or fixed right now.