Experience nature on your desktop

Depending on the task ahead I tend to work best in complete silence, with Internet Radio or ambient sounds. It really depends on my mood and the level of concentration that is required to get the task done.I discovered the free softwareÂ  Atmosphere Lite today which you can make use of to bring ambient relaxing sounds to your computer desktop.

The application provides different sound sets and graphics that go along well with each other to provide artificial nature right on your desktop. The lite version of the application is completely free to use and comes with ten different settings like Rainy Day, Deep Forest, Thunderstorm and Oceans Edge.

The quality of the sounds is pretty good and does not become boring or repetitive after a while. Each setting makes use of different sound samples that work well together. Samples can be added or removed during playback, like Light Wind and a Campfire to your Ocean sounds? No problem. 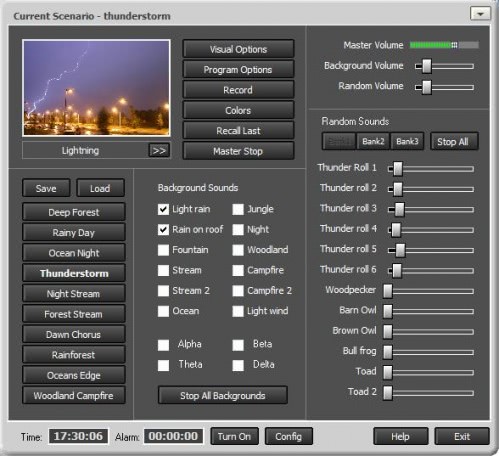 The sounds are divided into Background Sounds, like Rain, Night or Ocean and Random Sounds like Thunder Roll (six different !) and animals. Sounds can be recorded, the application makes use of the Windows Sound Recorder. I received an error but was able to record sounds normally with Audacity. Any other program that can record sounds directly from the sound card will do.

Atmosphere Lite is a nice application for those hours where you just want to relax. Could be very nice as a general background sound during night or breaks during the day. The two commercial versions of the product come with additional songs, longer loops and import functions.

One last remark. The Lite version comes with four so called Brainwaves that are supposed to stimulate the brain. Did not work for me though, found the four available ones rather annoying.

Both commercial versions are available as 21 day trial versions that you can download and install on your PC to test them before you make a buying decision.