RSS Feeds are very handy if you visit lots of websites regularly because they tell you exactly when a website was updated. It's relatively unknown to the general Internet crowd though, mostly used by blog owners and tech savvy users which is a real shame in my opinion. Feeds will never be something for the mass market, at least not in the next years.

Feed Analysis is a online script that analyzes Feedburner feeds. Feedburner is without doubt the most popular service that provides feeds and many tools and add-ons for them. Most of the blogs that I read regularly use Feedburner. The interesting aspect is that you only enter the url of the feed and get detailed information about it. You can select a period of time that you want information for which ranges from 3 months to 50 months. 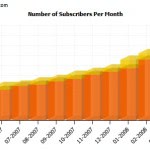 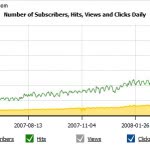 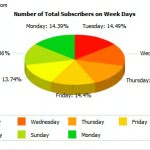 Each chart contains several interesting information for webmasters and other interested users. You can see the monthly growth, see how many new subscribers have joined in a particular month, get information about subscribers & hits and see which day is the best and worst of the week. Some are only available if the blog uses Feedburner Pro.

What I really like are the projections and averages that are displayed. Feed Analysis calculates the gain in subscribers in the next three, six and twelve months. According to the predictions I hit 10K subscribers in less than three months and a whooping 25K in 12 months. The estimated banner ads and blog values displayed are just that, estimates that can't be right because they only take the feed into consideration.

Those information can be quite valuable if you intend to purchase a blog to verify the feed count for instance.

Update: Feed Analysis does not appear to be available anymore. You can get a couple of stats on Feedburner itself but they are not really comparable in depth.