Photo Books are a great gift idea. I once created one manually which was lots of work, never thought about the possibility to create one on the Internet before. The benefits are clearly that the photo book looks more professional but still keeps the unique touch which can be attributed to the pictures and text that can be added to the photo book. Creating a photo book on the Internet can be a time safer as well.

Albelli Photobucket is one of those services on the Internet where photo books can be created. Unlike several other services on the Internet it provides an Adobe Air application which comes with an advantage and disadvantage. The advantage is the fact that the application is run on the user's computer which means that there is no delay when choosing photos from the hard drive of the user. Photos can also be imported from Photobucket, Flickr and two other image hosters.

The disadvantage is Adobe Air. Well not really an disadvantage but Adobe Air has to be installed before the Albelli Photobucket application can be used. It's not a complicated process though and everything runs fluent when both applications have been installed. 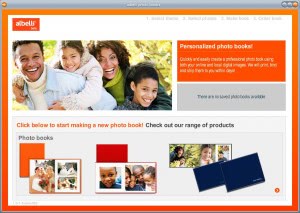 The process in the application is always the same. The user chooses a product that he wants to create. Products are different sized photo books that vary not only in sizes but also in the amount of pages.

The second step is optional. A theme can be selected. Currently five different occasions each with several themes can be selected. Some examples would be themes for weddings, vacations or a baby.

The photos can be uploaded in the next step. Supported are photos from the hard drive and from four online image hosters. The four are Flickr, Photobucket, Picasa and SmugMug. Multiple photos can be imported at once. The application recommends to select additional photos if you have not selected enough to fill all pages with at least one photo.

Photos can be placed manually or automatically in the album. Between one and four photos can be placed on each page of the photo album. What I really liked was the creation process. Each page can be made with a different layout which means that you can place between one and four images on a page and add text to it as well. Each photo and the text can be placed freely on the page. Photos can even be rotated and resized if so desired. It is always possible to add more images and pages or remove some. I would probably leave some whitespace on the first page to write something manually on that page.

Just write a comment to let me know that you want to have a photo book and let me know what you plan to do with it.