When you download a file in Internet Explorer you get the option to run or save it. The run option however is not available in Firefox by default, you can only save the file or cancel the download. Running files directly has one advantage over saving them and running them from the hard drive afterwards; The setup files will the located in the temporary Internet cache which - in my case - is cleared whenever I close Firefox.

So, if I want to install a software I can pick the run option right away to do so and not worry about the file that gets downloaded in the process, as it is removed from my system automatically.

Thankfully though the Open Download extension for Firefox was developed by Jeremy Gillick which adds this functionality to the Firefox download dialog. What I really like about this extension is the fact that it simply adds the Run button to the dialog without changing anything else.

Mozilla Firefox supports a run command now as well. The browser displays a file download dialog by default that gives you the option to save the file to the local system, or open it with a selected application.

This is in fact superior to Internet Explorer's run option as it provides you with options to run the file with any software that you select from here.

Some programs are listed by default, but you can pick any file on your system and run the download with it. 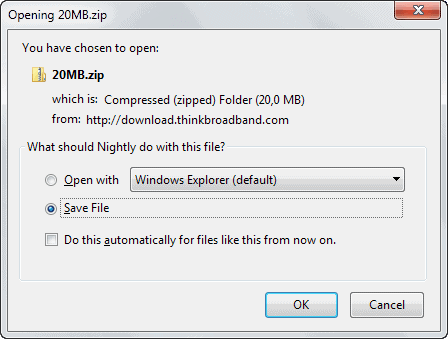 If you check the "do this automatically for files like this from now on" the selected action will be executed automatically, so that the file is either opened directly in the program that you have selected after you have checked the option, or saved automatically. A save to browser is still displayed in the latter case though.

There is no need for an add-on like Open Download anymore as Firefox supports the option out of the box.