I don't want to make a big fuss about it. I tried lots of software programs to record Internet Radio streams and found one that was the perfect fit for my situation. I prefer software that would offer all the traits of a music player and allow me to record Internet radio as it is easier to handle than two applications.

Most programs would allow me to either play music or record radio but not both.

Thus, all those Internet Radio downloading applications like Raima Radio, Stationripper or Phonostar have not made it into the final round. I also did not want to use huge media clients such as Windows Media Player that would simply suck up too many resources. What I wanted was a lightweight music player with the capability of recording Internet Radio streams.

The function to record Internet Radio is already implemented and can be accessed by simply right-clicking the stream url in the music player and selecting 'Write to Disk' from the menu. This saves the stream from that point on until you stop the recording. 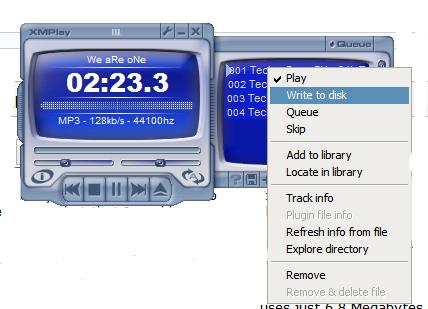 It is possible to record the stream as one huge mp3 file or save individual tracks which is probably the better and organized way to record Internet Radio.

The only reason why I would choose another application would be if I wanted to schedule a recording or record more than one station at a time. The program that offers that functionality is StreamWriter. I have reviewed StreamWriter here and don't want to rehash everything but the program is awesome.

You can schedule recordings, record as many Internet radio stations as you want at the same time, add songs to a wishlist to get them recorded automatically by the program as long as it is running and a lot more.