Mozilla has just released Firefox Focus 1.1 for Android. Firefox Focus is a mobile browser that puts the much of its focus on user privacy.

The organization released Firefox Focus -- known as Firefox Klar in German speaking countries -- about a month ago for Android.

More than one million Android users have downloaded and installed the mobile browser in the past month. The browser is not only popular, but also highly rated with its review score of 4.5 based on more than 9100 ratings at the time of writing.

The new version of Firefox Focus is already available on Google Play. Existing users may have received the update already, or may check for and install the update through the Google Play application on their devices. 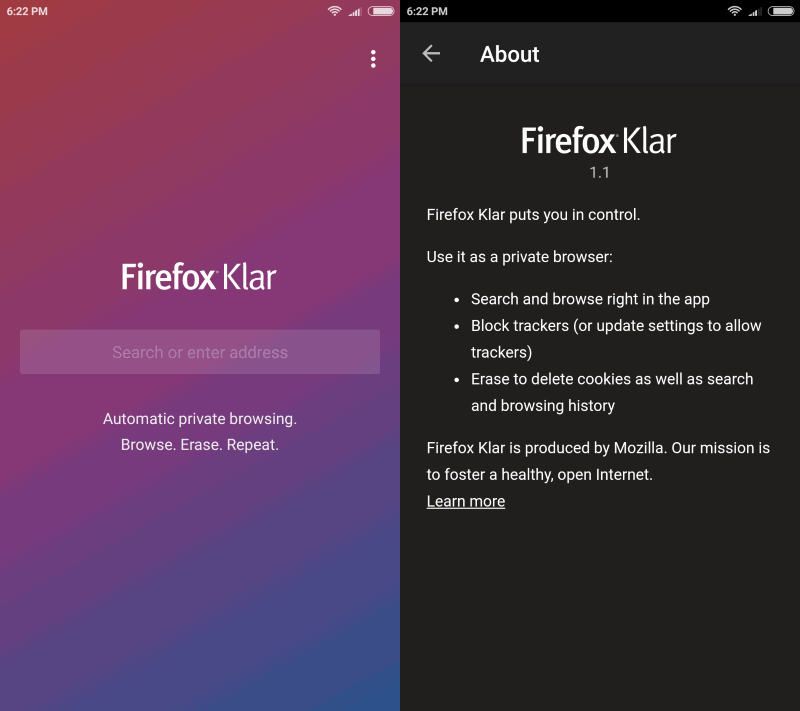 Full Screen videos are supported by the mobile browser on the majority of video sites out there. Mozilla notes that this was a top requested feature of Firefox Focus users. While the feature works on most video sites, it does not on the most popular of them all, YouTube. The reason for that is that support depends on a bug fix from Google according to Mozilla. The developers plan to roll this out as soon as Google fixes the issue.

Another change that Mozilla implemented in the new Firefox Focus version for Android is support for unrestricted file downloads. Firefox Focus users can download any file type now using the browser.

Lastly, Mozilla updated the notifications functionality of the mobile browser. Instead of just displaying a reminder to erase the browsing history, notifications may feature a shortcut now to open Firefox Focus.

It is clear from the description of changes that Firefox Focus is a basic browser. Two of the three changes that Mozilla revealed on the official blog are standard features of browsers, even on mobile.

Firefox Focus seems to be a big success for Mozilla; it is nowhere near the popularity of Firefox yet, that is for sure.

Now You: what's your take on Firefox Focus right now?