Google removing Close other tabs, Close tabs to the right from Chrome

Google plans to remove the tab context menu items Close other tabs, and Close tabs to the right, from the company's Chrome web browser.

Google made the decision to remove the two context menu options years ago, according to the bug on the official Chromium site, but never got it done up until now.

The company cites lack of use as the reason for removal. Additionally, the two context menu options add complexity too Chrome, and add additional scanning time "due to the menu length increase".

WE ARE NOT CURRENTLY PLANNING TO REMOVE CLOSE TABS TO THE RIGHT.
Maybe, some day, in the future, with more data and more discussion;
so that shouldn't be taken as "this will persist inevitably",
only that it's not on the table right now.

Google removing Close other tabs, Close tabs to the right from Chrome 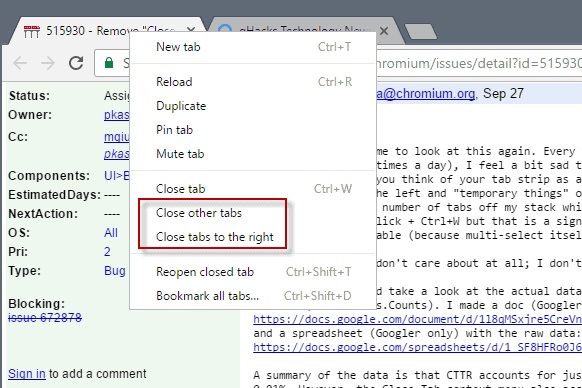 Usage stats, which Google revealed in September 2016 highlight the relative usage of each context menu item of the browser:

Relative in this context means the percentage of all context menu actions by Chrome users. Close tabs to the right is listed there with 6.06% of all actions, and Close other tabs with 2.20% of all actions.

This makes it a more popular action than mute tab, and less than 0.60% less popular than new tab. Chrome users have other means to spawn new tabs or close them which may explain the relatively low usage stats for those actions.

Even close tab, and reopen closed tabs, are not too far away when it comes to relative usage of the actions.

It appears that the removal has been assigned in February, and that Chromium and Chrome will see the removal of the two options in the near future.

Side note: Google plans to remove the bookmark all tabs option as well from the browser. It is unclear however when this is going to happen, as no date has been given yet.

Google notes that you still have an option to close multiple tabs. Simply hold down the Shift-key, click on all tabs that you want to remove, and use the keyboard shortcut Ctrl-W to close the selected tabs.

Now You: Are you affected by the change?