Improve your typing with Typing Stats for Firefox

If you type a lot on your computer you are probably interested in improving your typing skills further to complete given tasks in a shorter period of time.

We have covered quite a few typing tutors in the past here on Ghacks: Online Typing Tutor and Rapidtyping come to mind among other tools and programs.

Update: Typing Stats is not compatible with Firefox 57 or newer. A comparable extension is not available. You could check out Grammarly which is also available for Firefox as it collects statistics among other things. End

The Firefox add-on Typing Stats handles things different, and while the way it does so may not be to everyone's liking, it is definitely a unique approach to the task. Instead of letting you type sample texts to analyze and improve your typing skills, it simply analyzes your day to day activities instead.

This approach has several advantages:

As I said earlier, you basically learn while on the job. Some of you may now be irritated considering that keyloggers more or less have the same functionality. They record all keystrokes, but instead of analyzing the speed and accuracy, they work with the recorded data in a different way. The author of the extension states that information are strictly kept local and not transmitted to servers.  Only statistical data such as the typing speed, mistakes and corrected chars are kept.

The Firefox add-on records a number of parameters, including the speed that you type in, the times you have been using backspace and the typing intensity. You can also retrieve information about mistakes that you have made, and a distribution of the errors by finger. 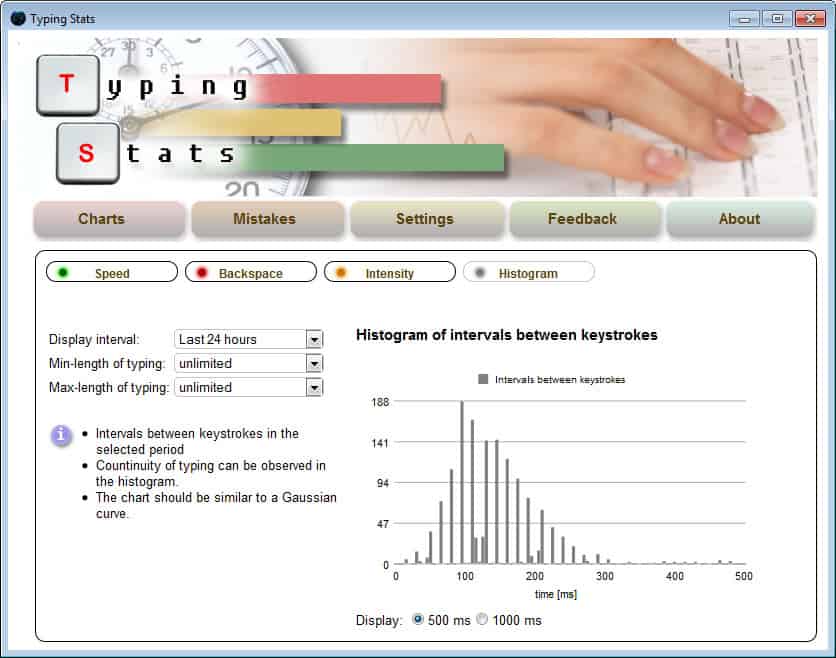 You need to run the program for some time before you get statistics that can help you improve your typing. You also need to understand that the typing is only counted if you are typing in the Firefox browser. If you are typing in Word, Excel or another browser, then the stats are not updated or counted at all. 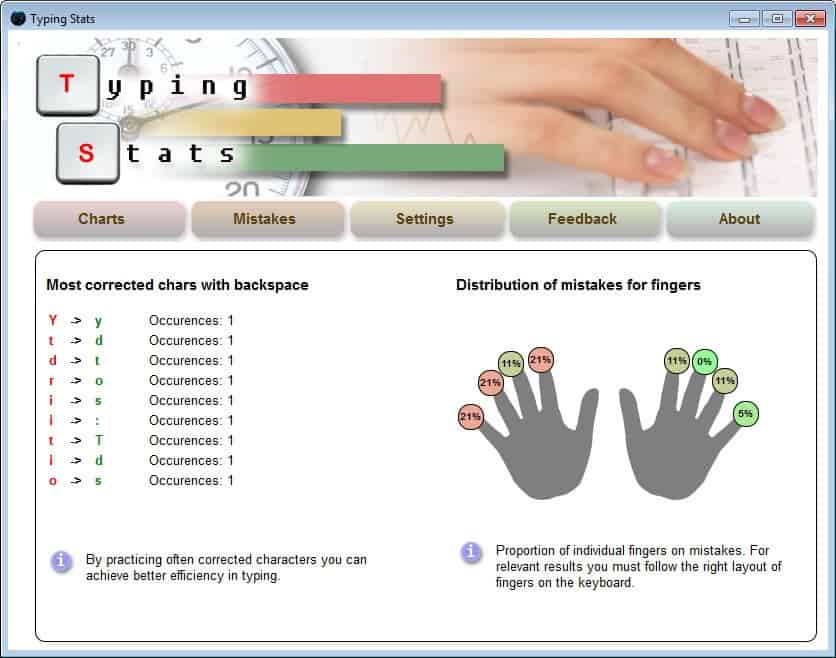 So what can you use the program for? The display of typing speed, backspace use and intensity is nice, but it does not really tell you much about the errors that you make. While you can use the information to see if you are making any progress, for instance speed-wise, it won't help you get a deeper understanding of what you need to change or improve for that to happen.

The mistakes page on the other hand may be useful in this regard, as it monitors mistakes and displays common ones on the screen. It for instance displays characters that get often corrected during typing sessions, which you can then try to improve with some training. It also highlights your weak fingers so to speak, the fingers that you make most mistakes with. This may for instance be a result of wrong finger positions on the keyboard.

As I have shown, the extension has its uses, but requires you to interpret and act on the findings on your own. If you think you can do that it is a pretty nice extension. I personally would run it for a number of days before taking a closer look at the statistics that it has generated for you.

One thing that I did not like at all was that it placed a button in the browser's navigational toolbar which could not be moved to another location.