Software Development and Spelling in your Source Code

For most developers, keeping your source code's comments, error messages, check in notes and even variable names free of spelling mistakes is not the most pressing concern.

As a developer and a dreadful speller, I'm one of the worst offenders and have been of the understanding it didnâ€™t matter as the mistakes were kept safely under to hood and didn't affect how the code ran.

I've never had a single complaint from a snobby compiler or interpreter about my awful spelling.

Over the years however I've worked with gigabytes of public and private code written by other developers and when I see incorrect spelling in source code it instantly undermines the credibility and professionalism of the whole source.

The problem can get more serious when a contributor or original writer attempts to later correct the mistake as this can lead to mismatches and errors. Sometimes the spelling mistake can be hard to rectify, as is the case if there is a misspelling in an interface, database table or column name.
I have come to value and see the importance of taking the time to correct spelling and grammatical errors and realized nowadays a spell checker is an essential item in the developer's toolkit.

Some Integrated Development Environments like Xcode and Eclipse have spellcheckers built-in. However Xcode's checker doesnâ€™t discriminate between words that should be checked (like comments) and syntax that should be ignored (like â€œ*argv[]â€). Eclipse is better at recognizing these differences although it does require you to provide your own dictionary.

Visual Studio 2010 has a number of third party spellcheckers that will keep you from getting red faced when you check in your code.

Spell Checker for Visual Studio by ComponentOne is the top of the line option but at 195$ for a license most developers opt for one of the free alternatives.

HTML Spell Checker is written by Mikhail Arkhipov, a Principal Architect at Microsoft and checks HTML as well as code comments. He uses the Microsoft Office dictionary and spell checking engine.

Another popular free option is Noah Richards's Spell Checker. It can check html, code comments as well as literal strings.

All of the above checkers are able to correct spelling in a number of languages. Now if we could just have a checker (and corrector) for dreadful code... 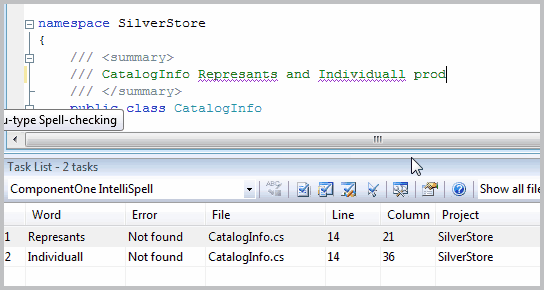 Article Name
Software Development and Spelling in your Source Code
Description
Why taking the time to correct spelling and grammatical errors is an essential item in the developer's toolkit.
Author
Charles Symons
Advertisement

Charles Symons has more than fifteen years commercial software development experience. He currently lives in Bangkok, Thailand where he is the Chief Software Architect at Salween Solutions Co., Ltd.
View all posts by Charles Symons →