If you have followed the news surrounding the Opera web browser lately you know that the upcoming Opera 11 browser features an extensions framework, much like the one used by the Google Chrome web browser. (for the nitpickers, I'm not saying it is the same, I'm saying it looks similar from a user perspective).

The first alpha version of Opera 11 has been released a while ago, and first extensions have been developed and are available at the official Opera Extensions gallery.

The count of all extensions offered is at 40 right now, a manageable number. If you take a look at the extensions page, you notice a few problems that may not be apparent right now, but will prove to be a problem once the extensions count grows in the hundreds or thousands.

The first thing that strikes me as missing is a listing of new or recent extensions. If I want to know what's new I have to look through everything, which is not comfortable at all, even at only 40 listed extensions. Imagine having to discover new extensions when the number has reached 500 or more. I like to discover new things (hej I make a living out of it) and the current layout makes it extremely hard to do just that. 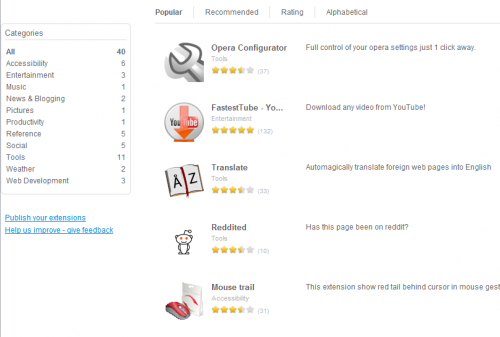 There appears to be enough whitespace to give the title its own row in the listing, and move the description below that.
In addition, there is no indicator of an extension's version on the page, or a changelog or history for that matter. Not everyone may need these on the other hand.

There do not seem to be tags or another form of classifications other than selecting a category for the extension. This makes the search less effective as it could be.

It is likely that the current page is just a temporary solution, to have a location for all extensions that get developed.

If I had to pick one of the missing features I'd like to see a recent filter added to Opera Extensions, followed by the display of the full extension title.

Have you been playing around with Opera 11? What's your impression so far?