Update: The tool has been renamed to Google Transparency Report. It offers access to more data than just government requests including requests by copyright owners to remove search results and information about Google product accessibility in the world.

The new report lacks some of the details though that the old one offered. It is for instance no longer possible to sort requests by country or get a detailed listing of affected Google products.

Google released a new tool yesterday that it calls Government Requests Tool. It offers a visual  representation of the request Google received in the past from government agencies to remove content, or provide information on users that use company services and products.

The map shows the number of requests that Google has received between July 1, 2009 and December 31, 2009 right now. The numbers are slightly misleading as they refer to single requests only. A single request may include one or multiple urls, or user names, that the government issuing the request wants to block or receive information about. 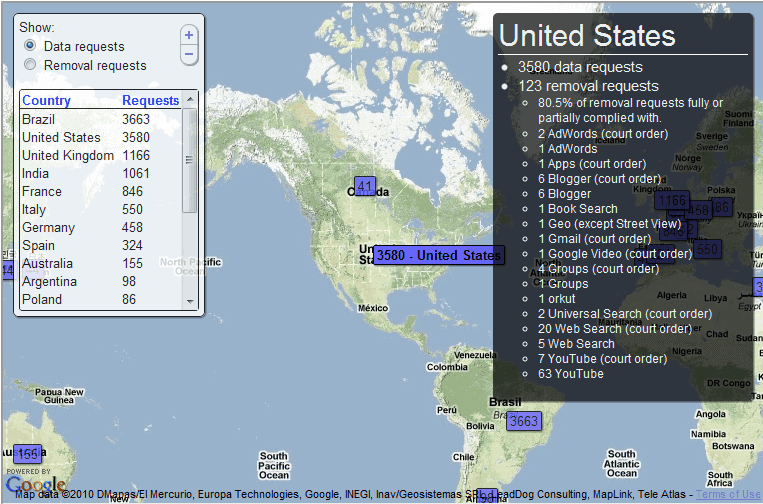 The statistics do not cover all categories of content removal. Child pornography and requests for removal of copyrighted material are not included for instance.

Brazil tops the data request table with 3663 single requests followed by the United States with 3580 requests and the United Kingdom with 1166 requests.

Brazil again tops the chart with 291 removal requests followed by Germany with 188 and India with 142. The United States are fourth in the listing with 123 removal requests.

Government requests is only a representation of the requests Google receives. It does not take into account other means of information retrieval or blocking. China for instance is not in the list which is understandable as they block information directly in their infrastructure.

The FAQ offers additional information about the statistics.

Update: Requests have exploded in recent time. Content removal due to copyright claims alone site at 1.77B requests and 893K affected websites since March 10, 2011.

Government removal requests have increased as well, but not nearly as much. Google received nearly 5000 requests in 2015 for instance.

The new report offers additional information, some of which are not about the removal of data or the request of information. Google's Safe Browsing statistics for instance list the warnings that Google displays to users on a weekly basis.

The report all in all is more useful than before thanks to the additional bits of data that Google makes available.