B-movies are low cost or budget movies often associated with popular genres such as Horror or Science Fiction. Not all have been bad movies and some were the proving grounds of actors such as Jack Nicholson or John Wayne.

Bmovies.com is a website that makes available hundreds of B-movies to viewers from all over the world. The real beauty is that those movies can be streamed - and thus watched - on the website provided that you have Adobe Flash installed on the system and integrated into the web browser of choice.

Four categories are available currently, those are: horror, science fiction, kung fu and wild westerns. The main website lists the top five movies of the four categories with brilliant masterpieces such as Metropolis, Battle of the Worlds and Carnival of Souls, but you can browse any category on the site to display a list of all movies of a particular genre.

Each movie has its own web page with additional information about actors, year of release, playing time and rating which can be a good indicator of the quality of the movie. All movies begin with a one minute commercial which is understandable because of the bandwidth costs of streaming those movies, but that appears to be the only commercial that you have to endure. 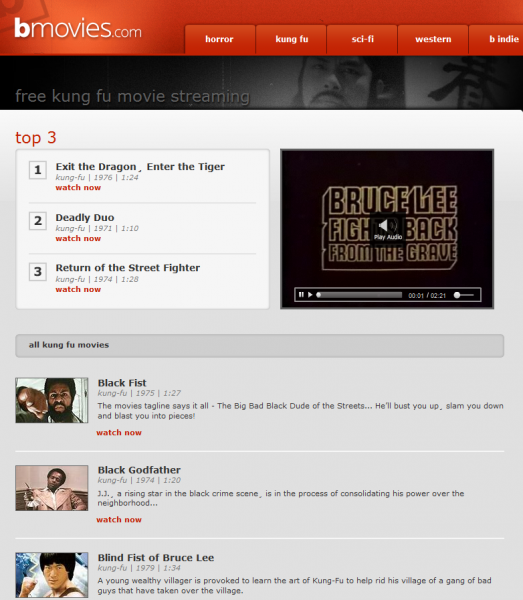 I would say the quality is a little bit better than that of Youtube videos. It looks like a 800x600 resolution that the videos are played in. Most movies have a running time between 1 and 1.5 hours.

Update: The site has been updated in recent times, and a fifth category of movies has been added. The indie category offers movies created by independent film makers who are just getting started in the film business, or are pursuing film making as a hobby, rather than a profession.

The site in addition features a DVD store where movies from the catalog can be purchased on DVD.

The majority of movies are still from the pre-80s period, and while you find lots of movies that you probable never heard of before, you also find movies with actors that you may know including a few Bruce Lee flicks. A lot of movies are black and white, but there are also color movies listed on the site.

If you like to watch B-Movies or independent movies, then this is definitely a site that you may want to check out for that purpose.