Free DVD is a small freeware program that you can use to remove certain disc protections and other unwanted features of Video_TS folders on your hard drive. The software can remove the Region Code, Region Code Enhancements, Macrovision and so called UOPS (user operation prohibitions) protections.

This is useful if you ripped a DVD to your hard drive with a software that did not remove the protection. This may not be that often the case but the small size of only 44K should convince you that this software is worth the download. This application is not necessary if you use the DVDFab HD Decrypter which I reviewed today as well.

Using Free DVD is absolutely easy. (1) Choose a Video_TS folder on your hard drive, (2) select the region code of the DVD and (3) check the remove protections entries and (4) click on Free DVD. 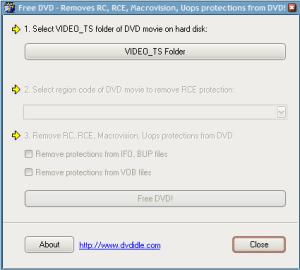 One of the best features is the ability to remove the region code from the DVD folder. You may know that the majority of DVDs are linked to a region in the world, and that you can't really play DVDs from other regions on most devices that you use.

Operating systems may let you change the region several times, but that is limited as well, and if you prefer to watch the DVD on the television, you have no choice but to either buy a copy that is from your region, or remove the region protection from the DVD by ripping it to your PC, running Free DVD, and burning it to DVD again.

If you like to watch DVDs in their original language, you are often left with imports. While you may sometimes be lucky when multiple languages are included by the movie company, it is often the case that the preferred language is not among them.

Imports may also have a different region code which may mean that you cannot play them at all at home, unless you have a DVD or Blu-Ray player that ignores region codes or other means of getting rid of them.