ShowMeDo is a relatively new website that is about videos by the people, for the people as they put it. Not the normal type of videos that you find on sites like YouTube but videos that teach you something.

The site currently has seven categories that list tutorial videos that you can watch: Python, Java, Ruby, Linux, Blender, Screencasting and Other. The biggest category is the Other category which will most likely be the most interesting category for anyonewho is not into programming, Linux and 3d.

I know that you would like some examples of videos that you can find at ShowMeDo, here we go. I pick three random ones: Getting Started with WordPress, Basic Car Maintenance and The Perfect Cup of Coffee, As you can see they offer tech related video tutorials and "real-life" tutorials as well. Playing a video works the same way as on YouTube, just click the link, the video loads and you press play in the video to start it. If YouTube works for you ShowMeDo will as well.

As I said earlier it is a relatively new website which means that they do not have millions of videos. It also takes a longer time for the users to create tutorial videos as you can imagine. The ShowMeDo wiki has a (written) tutorial that explains in detail how to create videos that can be uploaded to ShowMeDo: why not share your knowledge if you are good at something? 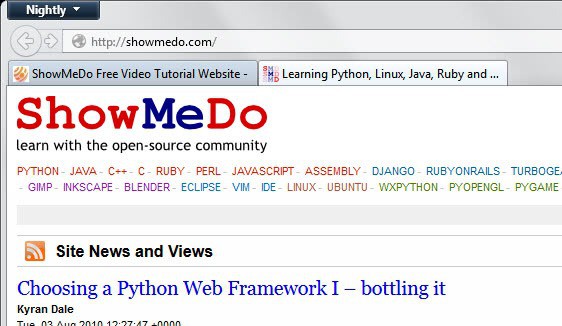 You may request tutorials about a certain subject. Users can vote which requests they are interested in and while there is no guarantee that it will be created, the chance is higher if a request receives a lot of votes from the community.

You still need someone to pick up your request so don't start with something like theory of relativity. I suppose basic stuff works best here.

If ShowMeDo manages to gain some momentum and exposure on the internet they surely will make they way as a great niche movie website that is able to survive amongst the big players. found at donationcoder

Update: The website has improved a lot in recent time. It displays popular categories, for instance beginner programming, and popular topics, Python, Ruby or Django, on the front.

It appears though that the site has not been updated for some time now, with the last news entry dating back to 2010.

Martin Brinkmann is a journalist from Germany who founded Ghacks Technology News Back in 2005. He is passionate about all things tech and knows the Internet and computers like the back of his hand. You can follow Martin on Facebook or Twitter
View all posts by Martin Brinkmann →
Previous Post: « Unsuggester and some Apache .htaccess tips
Next Post: List of WordPress Plugins installed »