Google revealed a change to its mobile search results pages yesterday that is already being rolled out to all users of the search engine. Google Search is the world's most popular search […]

Google started the roll out of new privacy controls for its customers on May 1, 2019 that allow Google customers to configure auto-delete parameters for Activity data that Google collects. Customers may […]

Google Images is a popular image search engine that returns images based on search terms that you enter into the search box on the site. Advertisement may be displayed on Google Images […]

Google is shutting down the classic Google Tasks web interface

Anyone using the classic Google Tasks web interface? Google informs users who open Google Tasks using a web browser that the classic version is going away. Google does not mention a specific […]

Google announced last year that it would shut down the company's social network Google+ for consumers but not for G Suite customers in 2019. A privacy issue with the potential to leak […]

Rumors started to circulate in 2018 that Google planned to shut down its Hangouts service in the future to focus on other chat applications. Google did not deny the rumor but made […]

Google Public DNS supports DNS-over-TLS: but you probably can't use it right now

Google announced the rollout of a new mobile search feature called "your related activity" that lets users pick up where they stopped previously according to Google. The feature is being rolled out […]

Study: Google puts logged out users in a filter bubble, too

Search engine DuckDuckGo published the findings of an experiment that it conducted earlier this year on the company's Spread Privacy website. The company wanted to to determine whether Google Search, the world's […]

Google is shutting down its Allo messaging service

Google revealed yesterday that it will shut down Allo, a messaging service that it launched in September 2016 alongside Duo, a video messaging service. Allo users can use the application until March […]

Rumor: Google to shut down Hangouts in 2020

A report by 9to5Google suggests that Google plans to shut down the consumer version of Google Hangouts in 2020. Google has not officially confirmed or denied the rumor, and the site cites […]

Google customers who use the SMS functionality of Google Calendar will have it replaced with notifications or emails in January 2019. Google published information about the change on the official G suites […]

Google announced yesterday that it will shut down the old (classic) Google Contacts interface on February 12, 2019. Google customers who are still using the old interface on that day will be […]

Google makes it easier to delete your search history

Google launched an update today that make sit easier for Google users to delete the search history. The company records search activity for signed-in users and associates it with a user's account. […]

A search for Google products on the official Microsoft Store returns only a few hits. There is Google, a search app for mobile devices or YouTube for Xbox One but the apps […]

Google announced plans yesterday to improve privacy for customers on Android, Gmail, and other services and apps that make use of Google account data. The company published findings of an internal project […]

Google to shut down Google+

Google just announced that it will sunset the company's social networking service Google+ for consumers in the coming 10 month period. Google+ was Google's last attempt at creating a Facebook competitor that […]

Google may track your location even if you disable Location tracking

The Location feature that Google built-into the Android operating system and some of its applications power location-based services such as Google Maps and provide Google with information about a customer's whereabouts. The […]

If you use Microsoft Edge or Mozilla Firefox to access YouTube to stream videos, read comments, or interact with the site in other ways, you may have noticed that the site is […]

Google will change the login prompt this month

Google plans to roll out a change to the company's login prompt this month that changes the design but not the functionality of the prompt. While the redesign is not major by […]

Google News update launched and users are in uproar

Google began to roll out an update to Google News, the company's news site on the WebÂ  yesterday following releases of the updated Google News application for Android and iOS. The new […]

Google unveiled Google One, an upgrade for the company's paid consumer storage plans, yesterday. Google One provides paying Google customers with access to storage plans ranging from 100 Gigabytes to 30 Terabyte, […]

How to get Google Search results in a different language

When you run searches on Google Search, results are returned based on your location and not necessarily on the query or language you used to type the search phrase. If you are […]

View Image for Google Images extension for Firefox and Chrome

Getty Images announced today that it has come to an agreement with Google that includes a global licensing partnership between the two companies and accompanying changes to Google Images. If you search […]

Google gives users greater control over reminder ads, but is it enough?

Google product manager Jon Krafcik announced changes to the company's handling of reminder ads, an advertisement that follows users around, yesterday. Reminder ads are those ads that follow you around when and […]

Google Plus has a massive spam problem

Remember Google Plus? Google's answer to Facebook that did not really meet the company's expectation even after forcing most sites and websites to integrate it in their sites? I use Google Plus […]

Google unveiled Android Go some time ago. Android Go is an optimized version of Android designed specifically for low-end devices and infrastructure. As is the case with these "lite" versions, they are […]

Google announced a change yesterday that affects which version of the company's Maps and Search services users get. The change affects mobile and desktop searches and Maps access, and returns local results […]

If you use the official YouTube application on an Android device, you may have noticed that videos start to play automatically when you open the application or browse the video selection on […]

Google Finance: portfolio feature will be retired in November 2017

Google will retire the company's Google Drive software, a client used to sync files between local devices and Google's cloud, on March 12th, 2018 for all customers. Customers who run Google Drive […] 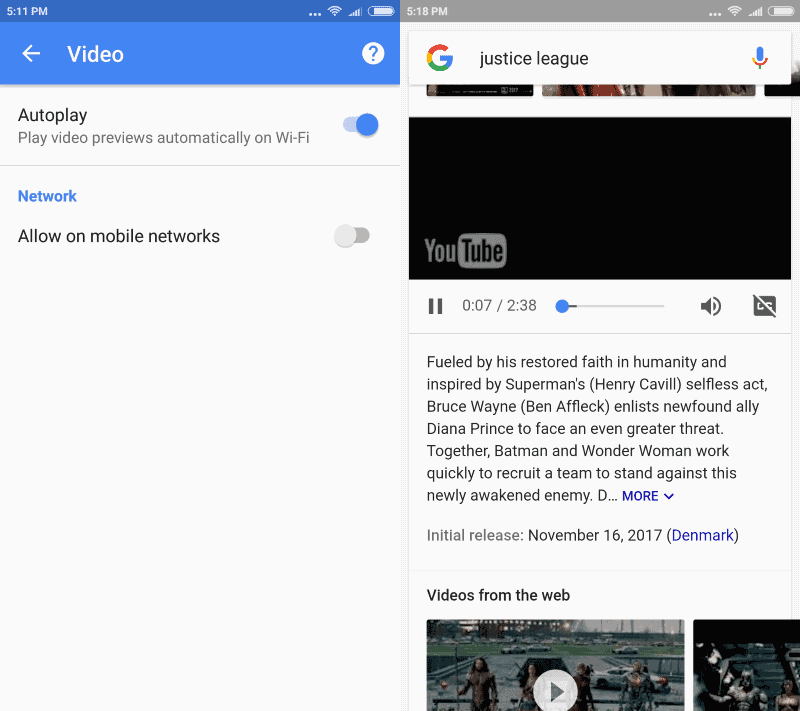 Google announced on August 18, 2017 that company engineers enabled autoplaying videos in Google Search results in Chrome and the Google application for Android. The feature will roll out to all Google […]