The main idea behind DAZN is very similar to what services like Netflix or Amazon Prime Video offer, but for sports: provide users with live and on-demand sports content for a flat fee.

Not all games are streamed live necessarily though. This is the case for the Primera Division, the Serie A and the Ligue 1, but not for the English Premier League.

Still, DAZN plans to stream more than 200 Premier League matches live, and will make available all other matches on its platform for on-demand streaming. 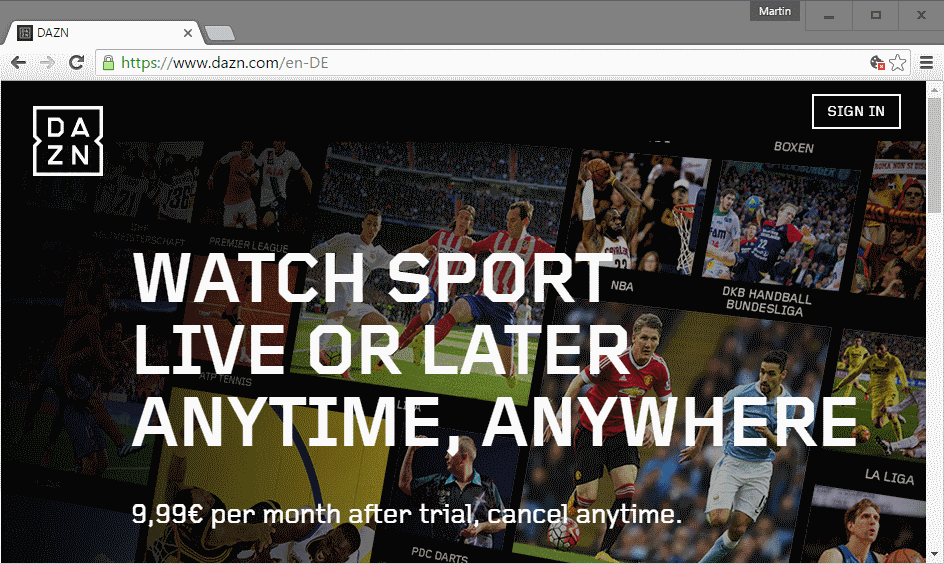 The same is true for NFL streams. DAZN will stream 50 regular-season matches live, and on top of that 11 playoff matches and the Super Bowl.

DAZN plans to stream more than 8000 live events in the first year, and make available on-demand content on top of that.

The service lists live and "catch up" matches and events on the start page. You will notice that additional leagues -- K-League, Serbian SuperLiga, Jupiler Pro League and more -- and events are covered at least partially as well.

Content is not available indefinitely though it appears. There are no options to watch games from the last season for instance. Considering that the service just launched, it is possible that content remains available but that is not clear currently.

One interesting option is the ability to click on a league, and then on a team you are interested in. This displays all available on-demand streams and upcoming live events for that team.

Supported devices include nearly every device capable of streaming: smart TVs, mobiles and tablets, computers, and game consoles. The only devices that appear to be missing right now are Microsoft's Xbox and Apple TV.

The service is available for €9.99 per month which is roughly $11 US Dollar. A free 30 day trial is offered currently, and users may cancel the service at any time. Also, two simultaneous logins are allowed.

It appears that it is limited to Germany, Austria and Switzerland currently though.

DAZN is backed by Perform Group, a digital sports content and media group. Pricing and coverage is quite good already, but the site itself needs some work. It feels messy and difficult to navigate. Also, the available content is rather low at the moment. This is going to change when the major leagues start later this year though but it is unclear right now for how long content will remain available on the site.

No word yet on availability in other countries.

Now You: how much would you pay for a service like DAZN, and what do you expect?