It is quite common that Mozilla is releasing a second update shortly after a Firefox update has been released. We have seen this happening in the past several times, usually to resolve a bug that slipped through but is critical enough to be dealt with right away.

The company today released Firefox 19.0.1 for Windows 8 only. This may come as a surprise to Firefox users who are not using Microsoft's newest operating system. When you check for updates on Windows 7, Linux or Mac for instance, you will receive the notification that there are no updates available for Firefox 19.0.

When you do the same on Windows 8. you will notice that an update is downloaded and installed, bringing the version of the web browser to 19.0.1. To check for updates do the following:

The Firefox 19.0.1 release notes list all the changes of Firefox 19.0 plus the following change: 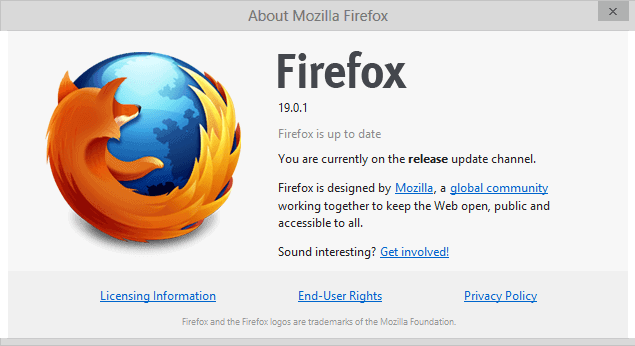 What may be puzzling is that Firefox 19.0.1 has been created for all supported operating systems and not only Windows 8. If you check out the ftp server, you will notice that the version of the browser is available for operating systems that are not Windows 8.

It appears that Mozilla plans to not deliver the update for other operating systems, to join the stable channel later on when Firefox 20.0 gets released by the company.

Users who download and install the new release of the Firefox browser for their operating system can nevertheless upgrade the version to 19.0.1 even if they are not running Windows 8. It is however not necessary to do so and not recommended.

If you want to find out more about the issue that caused the updated for Firefox on Windows 8, check out the Bugzilla bug listing.