by Martin Brinkmann on September 06, 2012 in Development - 15 comments

Most of the blogs that I own or administrate run a copy of the blogging script WordPress, and one common task is to take care of blog software and plugin updates. WordPress has just released an update that brings the version of WordPress to 3.4.2. This update is a maintenance and security update, which makes updates a pressing matter.

WordPress webmasters should receive update notifications in the admin dashboard from where they can run the update internally to install it in record time. Those who prefer to install updates manually can download the latest version from the WordPress project website. 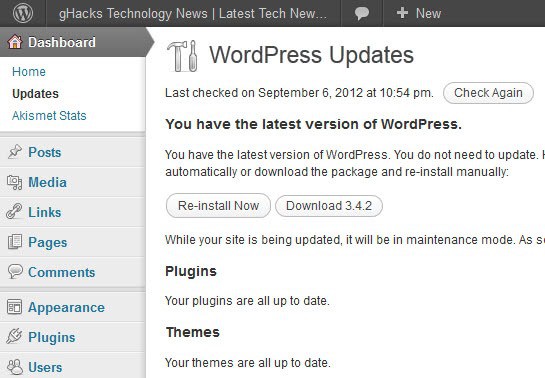 As far as maintenance goes, a total of 18 different bugs are fixed in WordPress 3.4.2 of which the majority appear to address issues that only a minority of WordPress admins and users likely have come in contact with.

The security fixes and hardening are reason enough to update the blog as soon as possible to avoid issues that can arise if these are exploited in attacks.It is recommended to backup your blog first before you run the update to make sure that you have an option to restore it to the previous version if the need arises. While it is unlikely that you will have any issues with this update, it is still possible that this may happen. Happy updating.