Google Talk is an instant messaging software program for Windows that can be used to chat with friends and colleagues, initiate file transfers, do voice over IP and to send and receive […]

Google Update is a background program by Google that gets installed on Windows operating systems if you install software such as Google Chrome, Google Pack or other Google software on the system. […]

Remember BumpTop? We covered a tech demo of the 3D desktop technology back in 2006 and felt that it could be a great way of helping computer users bring order to the […]

While taking a look at my calendar today, I noticed that Google has rolled out their offline feature for Google Calendar, and after some searching I found that this is indeed the […]

Observant computer users may discover the process googleupdate.exe running on their computer system after installing a software product created by Google. This can be the new Google Chrome web browser, Google Picasa […]

A deal between Life and Google makes more than 10 million photographic images available on the Internet. The collection spans from the 1750s to today. Google provides a special search engine for […]

Google Multi-Column View is a Greasemonkey script that can display Google search results in two or three different columns instead of the default single column display that Google favors. Doing that can […]

The Google Translate service was known for a long time to translate text and websites from one language to the other. The current version features 34 languages from English over German to […]

Letâ€™s talk about Google Chrome. Why not? Everyone else is. I would be willing to bet anyone reading this article has already downloaded the Windows beta and is probably using it right […]

Rumors have been filling forums, blogs and websites that Google was working on a browser to compete with Microsoft on yet another level. Those rumors never ceased completely in the last three […]

Google is testing new ideas and implementations before they go public for everyone. The testing grounds for Google Search are called Google Experimental, a publicly accessible area where everyone can test out […]

Google Analytics is almost the default free service for any blogger, and for good reason. Itâ€™s a solid service, essential for anyone needing to track visitor statistics and create a successful blog. […]

Page Rank Tool To Check All Pages Of A Domain

The page rank of a single page on a website can be identified through various means. Users can use the Google toolbar - or a similar product -, run website scripts that […]

Google released a new service today called Google Knol, a service aimed to take on Wikipedia and in my case will definitely beat it after a while, although there are some differences […]

Everyone likes to bang on about how Google Docs is going to be the end of Microsoft Office, but people say that sort of thing all the timeâ€¦ 2008 is going to […]

Gmail Labs quicklinks to find anything in a flash

Gmail Quick Links is a new feature rolled out in Google Labs for Gmail which enables you to create some links for frequents searches, but it can be used for much more. […]

As a tech blogger I am really embarrassed to say I haven't heard anything of this service before it was rolled into beta today. However, this means I was thrilled this morning […]

The popular â€˜Better Gmail 2â€™ Firefox extension adds a whole lot of great extra functionality to Gmail through various Greasemonkey scripts. What I loved the most was the inclusion of the fantastic […]

Google Earth is definitely an application that is fun to play around with. Chance is that you will stumble upon some strange sights sooner or later. Plugins make the discovery process easier […]

I don't know how many of you have tried Google Sites, which is a Wiki like application available for Google Apps users. Although the application itself lacks a lot of features (more […]

Update: Both Google Gears and Flock have been discontinued in the meantime. Flock may not be completely dead as the team announced that it is "working on something awesome". It has not […]

Google has added a very interesting feature to Gmail called Labs which is accessible in the account options. Labs is basically a testing ground for Gmail add-ons created by members of the […]

Google Code University is an excellent resource for Computer Science students and programmers in general. All videos and Powerpoint presentations published at the University are released under Creative Commons. Four different kinds of courses are available right now, they are Ajax Programming, Distributed Systems, Web Security and Languages.

When we read the announcement that higher quality videos would come to Youtube we were delighted that the video quality would finally see an upgrade. Apparently the conversion has started and some videos are already available in different quality versions. It still looks like Youtube is testing settings and stuff and that not everyone can access those higher quality videos yet.

Why is Google.com redirecting me to another Google domain? Google has just release a document list uploader to help you upload your stuff in large batches, and this is one smart move, since I had some frustration a while back because […]

While browsing the GoogleDocs blog I found an interesting update about two updates already in this year. The less significant, although probably better update if you want to organize yourself is the ability to add sub-folders. For me this was a much awaited feature since no matter how many tags and other organizational stuff I can add, a good folder structure is always a must.

Send SMS to your Girlfriend/Spouse for free with Google Calendar

I have to admit, I'm not the cheapskate, I don't try dodging costs and I don't employ the technique described here, but it is a fairly easy way to get rid of […]

The blogosphere was going crazy last week with rumors about the sudden Pagerank drops of several authority sites like Problogger or The Washington Post. Soon enough lots of theories made the round which ranged from being punished because of selling links to being in a blog network that would list all of its sites in the sidebar.

A white background with blue links and black text is how the default Google website looks like. While this might be effective and offers a great usability it looks pretty boring but this is going to change right now. It is possible to redesign Google Web Search if you use Firefox.

Reevaluating Google is the best theory

I was thinking about looking at other services that I could try to see if they were any better than the Google services that I'm using at the moment when I came upon a post by Everton who was writing about the same thing at this blog. His main domain received a major Pagerank decrease from 6 to 3 and this made him realize that it is probably the time to move on and look for services that do it better than Google. 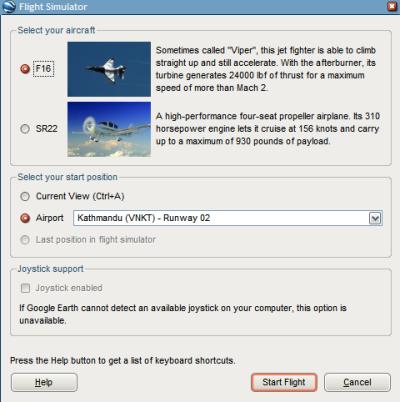 I never played around with Google Earth for long and did not follow the news that closely. Maybe that is why I never heard about the flight simulator that is build into Google Earth. I read about it today in a computer magazine and thought it would be cool enough to post it along to all those other unknowing ones.

Now ain't that interesting ? You can use Google Maps to get directions from one location to another. It is most of the time pretty accurate displaying information about highways, signs, exits and so on to give you a good impression of the route that lies ahead. You can try it now and head over to the Google Maps website and use the Get Directions tab to enter a starting point and destination to see how the system works.

You might have read about the google translate proxy that makes it possible for some to access blocked websites because the administrator did not think of blocking the translate function of google as well. What most people donÂ´t know is that Google offers at least two additional services that can be used as a webproxy to bypass restrictions imposed upon you by your system administrator.

I find this rather interesting and thought I give you some insights. Google Checkout is a new google service similar to Ebays Paypal that you can use to send other people money over the net without a bank transaction between the two parties. Checkout went live a few days ago and Ebay was quick and reacted agressivly by not allowing their buyers and sellers to use Google Checkout as a method to close the transaction.