If you have been to YouTube in the past 24 hour period you may have noticed a notification in the comment section on the website that provided you with information about changes to YouTube's comment system that Google made.

The announcement itself highlights the benefits or advantages of the new comment system.

You can now "see more from people you know", use the new "threaded format" and "+mentions" options that is made available, and also have your comments published not only on YouTube but also on Google+.

What Google fails to mention in the notification is that you do need Google+ to comment on YouTube. If you do not have a Google+ page yet, you need to create one first before you can post comments or reply to existing comments. 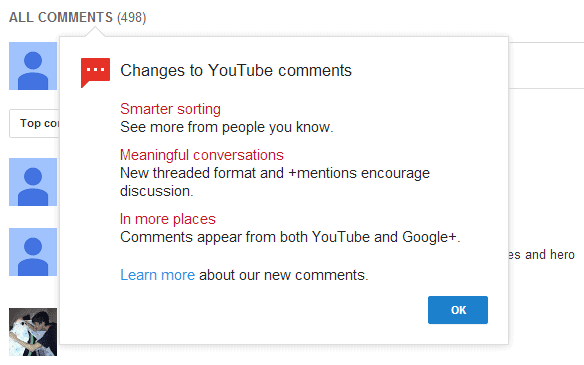 You can click on the learn more link here to find out more about the new comments implementation on the world's most popular video hosting website.

Most of the changes introduced make sense. Options to use rich text, to add urls to comments, or discussions all make sense from a usability point of view. I'd argue that the majority of YouTube users are fine with those changes.

What is causing controversy though right now is the Google+ requirement. YouTube users who want to comment on the site need to create a Google+ account / page before they can do so. This is true even if they have no intention of using Google+.

The second issue that has received its fair share of criticism is that channel owners are now able to remove comments on their channels without any indication that they have ever been placed there.

Previously, it was obvious when comments were disabled. What's likely going to happen is that at least some channel owners will use the new power to remove any negative comment about their product from their channel, and to make things even worse, block users from leaving comments in the future.

It needs to be mentioned that it is still possible to keep posting under the current YouTube name, and even to create a new name that you want displayed on YouTube while commenting.

Could Google have implemented an improved standalone commenting system on YouTube? Yes, it could have done so. But since the company is pushing its Google+ service at any opportunity that arises, it was only a logical consequence that it linked the commenting system to the social networking service.

What's your take on the change?

Martin Brinkmann is a journalist from Germany who founded Ghacks Technology News Back in 2005. He is passionate about all things tech and knows the Internet and computers like the back of his hand. You can follow Martin on Facebook or Twitter
View all posts by Martin Brinkmann →
Previous Post: « How to turn off the Hangout History
Next Post: Google updates the AdSense homepage »