Google launched two new Android apps recently called Docs and Sheets which came as a surprise to some as they clashed functionality-wise with the existing Google Drive application.

While both apps added new features to the document editing process, namely the option to save documents to the device for offline viewing and editing, and real-time collaboration via the commenting system, the majority of features was shared with the Google Drive app.

Another update that is currently being rolled out is an update to Google Drive. This update removes a major feature of the app: the editing of documents.

While you were able to edit documents -- and not only view them -- in older versions of the Google Drive application, you are now asked to install the Docs or Sheets apps to do the same thing.

You will get a reminder of that on first start of the new Google Drive application, and then again when you open any document using it. 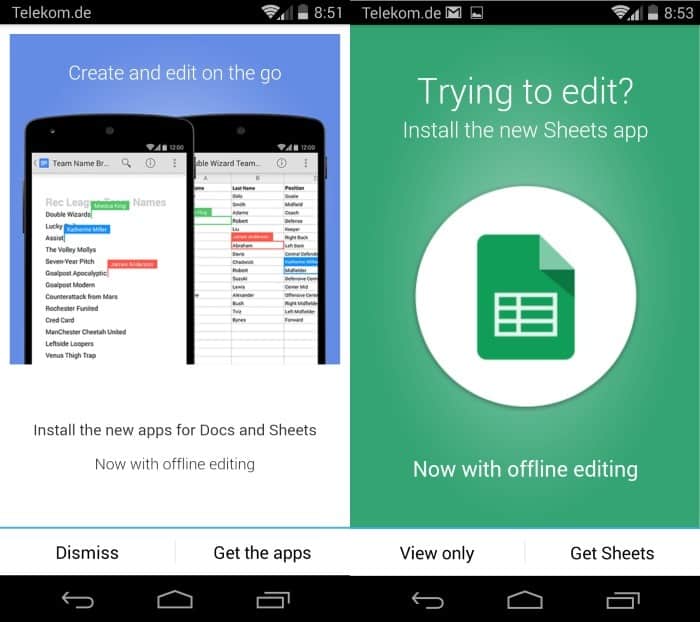 If you have Docs or Sheets installed, the document will open in the corresponding application. If you have not, you will receive a notification instead each time you do so.

The main issue here is that you are not made aware of the fact until you launch Google Drive for the first time. If you have received the update over night and want to edit documents while on the go, you need to install Sheets and Docs before you can do so.

Another issue is that you will see the intermediary page whenever you try to view an application if you do not have the two applications installed on your device.

There does not seem to be an option available to get rid of the information permanently so that it does not show up anymore. If you only view documents on your device, there may be no reason to install the two applications unless you want offline viewing functionality in which case you need to install them.

With Docs or Sheets installed, the experience is very similar to what it was before. The only difference is that they get loaded in another application, but since it looks and feels very similar, that should not be a big issue for most users.

It is very likely that Google will release a presentation application as well soon.