The search function has grown more essential as data continues to expand, whether on your desktop or on the web. We’ll cover news, tips, and updates on popular search engines online and locally, while also discussing our opinions on the latest news.

Search google (and update twitter) from the command line

There are some of us who prefer to do as much as possible from the command line. For whatever reason, this type of person wants to prove to the world the GUI […]

IFilters are plugins that are used by various indexing applications like Windows Search, the Windows indexing service, Windows Desktop Search, Exchange Server or SQL Server to name a few. An IFilter makes […]

You might have already heard about Google's new sandbox search engine that is showcasing a new search infrastructure. Google invited webmasters to test the search engine and provide feedback which might indicate […]

Did you know that Google - like many other search engines - changes their search algorithms hundreds of times per year? Search results get tweaked all the time by the developers and […]

Microsoft's new search engine Bing is doing quite well in several search engine marketing studies. It could do better and one interesting idea that the Microsoft researchers had was to create a […] 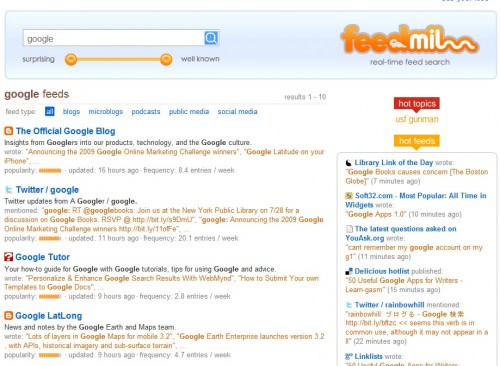 A Look At 4 Realtime Search Engines

Take a blind test and change your searching habits

I use Google out of habit and because I have always thought it is the best search engine. I've never objectively tried to compare major search engines and as a result I […]

Google Books is an ambitious project to offer which allows web users to search through more than seven million books online. Google just recently came to an agreement with rights holders that […]

Make The Web Your Notebook with WebNotes (With 50 Pro Invites)

I'm a student. I'm also a writer, a researcher, and a number of other things that all seem to involve a ton of research. Particularly that student thing. An increasing number of […]

Wolfram Alpha Gets Its First Core Update After Launch

One thing that many webmasters and users do not like is that search engines keep them in the dark when they update their search engine, be it search engine algorithm changes or […]

The coverage of Microsoft's new search engine Bing was quite extensive here on Ghacks but also on many other sites on the Internet. This is going to slow down in the future […]

A great way of testing a new search engine is to compare it to the dominant established search engine. BingAndGoogle offers a combined search interface that is more comfortable than working with […]

Join The Experiment: One Week Of Bing Only Searching

What better way to test a new or improved search engine than to be stuck with it for a full week without being able to fall back to other search engines. Bing […]

Microsoft's new search engine Bing has been released to the public earlier today. The reviews have been quite positive so far. Most modern web browsers can be customized by the user. This […]

Microsoft's new search engine has created some buzz since its introduction a few days earlier. The search engine is now live for everyone to test. It has to be noted that Microsoft […]

Yesterday I sat down at my main desktop PC to do some work and, out of nowhere, error message after error message popped up informing me the hard drive was at 100% […]

Any blog and tech site seems to have published an article about Microsoft Bing, the new Microsoft search engine that was formerly known as Kumo. No one except for Microsoft employees and […]

Google has recently introduced so called Search Options to their search engine which are hidden by default on any search page but can be activated with one click. Update: Google Search's layout […]

There has been a lot of talk about this new search engine by Wolfram which many called a Google killer. The strange thing was that this happened without anyone being able to […]

How are most Internet users discovering new interesting blogs or sites? The most popular methods are probably by following links on blogs they already read, through social media, and by recommendations posted […]

Worio is a clever mashup of several search engines, social bookmarking sites and personalization features to improve search. Update: Worio is no longer available, and there appears to be no comparable service […]

Google Fx is a userscript that you may install in browser's supporting userscripts to modify the appearance and functionality of Google Search. Google Search has always been displayed with a rather minimalistic […]

Searching for Files in Linux via Command Line

Being able to search for files is a fairly important aspect of using a computer. Naturally there are a number of ways to accomplish this task. You can use a powerful tool […]

If you perform a Google search at the moment you will notice that Google is flagging every website that it returns as malware. The sentence "This site may harm your computer." appears […]

Search Engine Optimization is essential for webmasters who want to promote their websites to their fullest extent. It is usually divided into onpage and offpage SEO. Onpage SEO describes the process of […]

Help charity effortlessly through the web

Charity can be helped significantly through minor changes to what we done online; by changing search engines, buying through a portal or even simply installing a Firefox extension. This article will highlight […]

Martin wrote an article in May about IconLook, a website where you can search for icons. I recently found another one, simply called Iconfinder, and as you would expect it enables you […]

The Microsoft Filter Pack adds additional IFilters to the Windows operating system which are used by Windows Search and depending applications to index the contents of document formats. To be precise, the […]

The Google Translate service was known for a long time to translate text and websites from one language to the other. The current version features 34 languages from English over German to […]

WinFS, Was it Really so Good?

If you were in any way interested in Windows Longhorn then WinFS will not be an unfamiliar word to you. This technology was to be part of the revolutionary next OS and […]

When I want to view a particular video online, I usually try YouTube since that's where I'm most likely to find what I'm looking for. However, there are times when the video […]

Yahoo, sick of them yet?

The Yahoo-Microsoft-Ichan soap opera got pretty damn annoying for a while there. In fact It wasnâ€™t even so much Yahoo and Microsoft, it was billionaire investor Ichan who really made it all […]

I canâ€™t fully understand some of the decisions behind the launch of Cuil, the wanna-be Google Killer. I also donâ€™t quite understand the amount of hype and media attention that went with […]