Google has released the year-end statistics of Google Zeitgeist 2009 which includes information about the most searched topics in various niches in the year 2009.

Google parsed billions of search queries by people that use Google to generate the statistics.

The default statistics show the search queries for the United States with the option to switch the region to another one instead. Available are dozens of other countries including Canada, the United Kingdom, Germany or the European Union (which is not really a country). You may dive into city listings as well, so if you are interested in what Google users from Atlanta, Columbus, Chicago or Miami searched the most for, you can find that out as well. 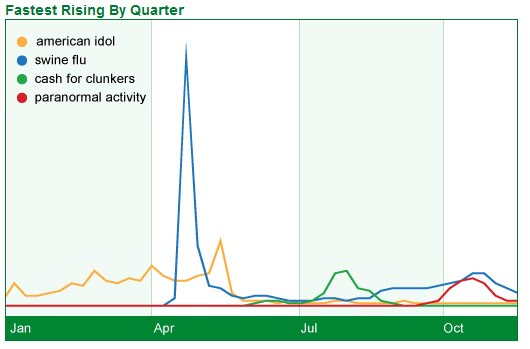 Five other listings are available in the side menu that display the same statistics for celebrities (divided further into weddings, deaths, marriages, break ups and tweeps), entertainment (lyrics, TV shows, video games, concert tickets and movie trailers), around the home (exercise, diets, informercials, recipes, how to and made by hand), sports (stadiums, coaches, rivalry, football, baseball, basketball and other sports) or city by city which lists the top ten searches for many cities in the selected country.