DNS Helper is a free software program for Microsoft Windows devices to switch the PC's DNS Servers to a public provider.

The news about Google's new public DNS service seems to have ebbed down a bit after the initial announcement. This can probably be attributed to the fact that reviews of the service where not all favorable.

The two biggest points of criticism were privacy and speed. A group of users stated that they would not want to use Google DNS servers because of privacy implications as Google, at least in theory, would be able to follow every move they make on the Internet.

Speed on the other hand was not best in class as well, at least not for all users who tried the service. While it did improve look ups for some, it did the opposite for others.

The best way to find out is to test Google's public DNS servers to see if they offer any speed improvements. We covered a DNS benchmark tool called Namebench a while ago which can be used for that purpose. You can also check out our listing of the fastest DNS providers.

But the benchmark software might not be needed in some cases. Some users would probably like to test the new DNS by simply switching to its servers in the operating system to see if speed improves noticeably. 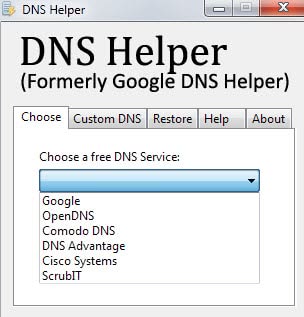 DNS Helper has been designed for this user group. The portable program provides one click access to switch the computer's current DNS server to Google's public server, and other services.

The program displays options to switch to one of the integrated DNS services with three clicks. It supports Google, Comodo, OpenDNS, DNS Advantage, Cisco Systems and ScrubIt currently.

You may also set custom DNS services in the software program instead. This is useful for instance to add your provider's DNS servers to the mix, or any other public DNS server that is not included by DNS Helper by default.

The application ships with a restore DNS functionality. This restores the previously used DNS provider so that it is used again on the device.

This can be useful, as you don't have to reset the information manually deep in the network settings.

DNS Helper is a portable software program for the Windows operating system. The 89 Kilobyte program can be downloaded from the developer's website. It requires the Microsoft .net Framework to run.

Update: The developer's homepage is no longer available. The program has been updated in 2012 the last time. We have uploaded the last version of DNS Helper to our own server. Please note that we don't support the program in any way, and have done so merely for archiving purposes.

If you are looking for an alternative that is still in active development, try DNS Jumper instead.