According to Yusuf Mehdi, Senior Vice President of Microsoft Online Audience Business Group â€œOne year ago today, we launched Bing. Itâ€™s been a whirlwind 12 months, with the team shipping tons of new cool features aimed at making it easy and fast to make key decisions and just get stuff done. We wanted to take a short break to say thanks. Thanks to all our customers who have used the service, sent feedback, become partners, told us where we can do better, read our blog, retweeted our tweets, and just generally supported us in this 1st year of our journey.â€ 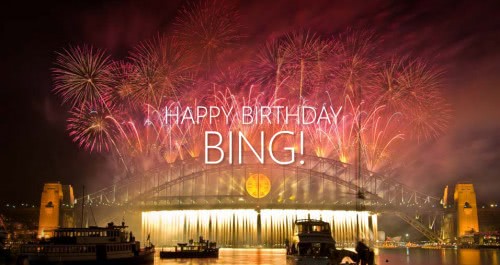 Many people have switched to Bing because of the bright "photo of the day", a feature that Google have also today announced they will begin to allow, in a way, with their search engine.

The giant of search has said in a surprise move that it will allow users to customise the Google.com homepage with photos from their own PC or from their Picassa library.

For Bing enthusiasts it's no substitute for the real thing and the search engine's photos have been sources of entertainment and education for all.Â  So happy birthday Bing, have a search on usÂ  :)