BitTorrent just announced a massive update to several of the company's core products. On the application side of things, both the uTorrent and BitTorrent application have received updates.

Both apps feature a redesigned user interface which should improve usability. Probably the most important new feature is the ability to download only select files from torrents instead of all the files contained within.

This was one of the most requested features for the applications, and it is now available. Other options include choosing download locations now, and options to either delete only the torrent or both the torrent and files.

Last but not least, both performance and stability has been improved according to the release notes.

Moving on to the uTorrent desktop client. Version 3.4 of the popular torrent client will be released today, and with it comes a change that introduces BitTorrent Bundle to the application. 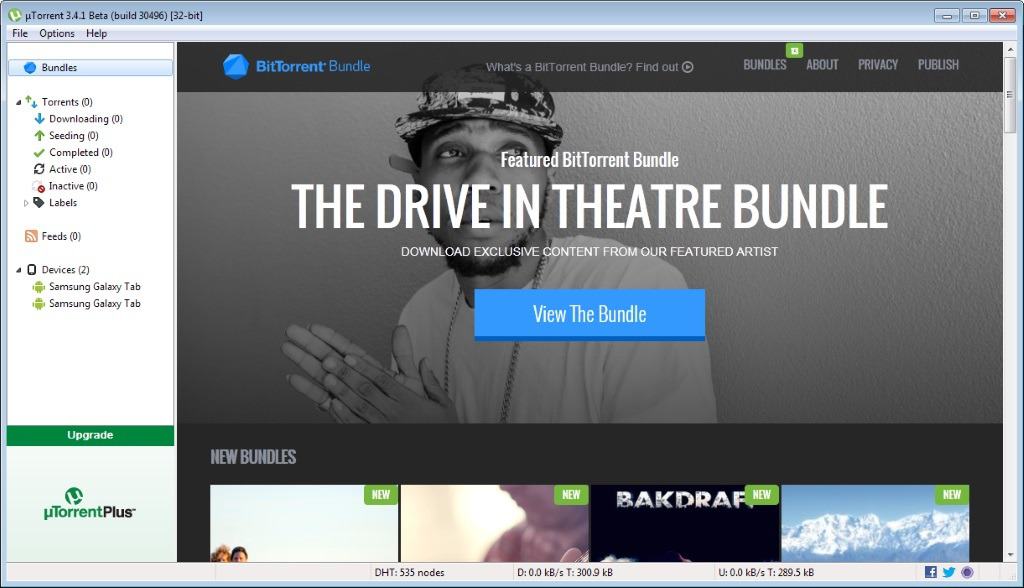 It is added in a non-obtrusive way. After you have updated to uTorrent 3.4 you find Bundle listed in the sidebar on the left. While it is listed in the top position, it is easy enough to ignore it if you do not want to use it.

So what is Bundle? It is an attempt to establish the torrent protocol as a way to distribute and monetize contents. When you click on Bundle, you can browse all available ones on a single page.

The majority of bundles are music related but you find different content types as well including audio books, ebooks, or comics. They are torrent files that you can download to your system with a couple of clicks.

Some bundle contents are restricted. You may be asked to enter your email address to unlock additional files of a bundle, as is the case for Moby's album Innocents for example, while others may only be available as a preview of sorts and not in their complete form.

Still, all contents that you can download are free. According to the company, more than 8000 publishers have signed up for Bundle already.

The integration of Bundle makes sense from a business point of view. It introduces the option to a large audience of users who work with torrents all the time. This could boost the popularity of the distribution platform significantly, which in turn is helpful to change the image that torrents have currently to the better.

While the announcement is live already, the updates to several clients are not. You may have to wait a bit longer before updates for desktop and mobile programs become available.

The latest version of uTorrent can be downloaded from the official website, the latest Android app version from Google Play.

Martin Brinkmann is a journalist from Germany who founded Ghacks Technology News Back in 2005. He is passionate about all things tech and knows the Internet and computers like the back of his hand. You can follow Martin on Facebook or Twitter
View all posts by Martin Brinkmann →
Previous Post: « Hubic review: France-based file storage solution with competitive pricing
Next Post: Some Telegram questions answered: WhatsApp Messenger alternative »