Microsoft paid more than 8 Billion Dollars for Skype and it was clear to me back then that the company had to have plans to push Skype into Microsoft products to not only improve the products but also to get back the money it invested into the technology.

We have seen that happen soon thereafter, for example by coming to an agreement with Facebook that integrated Skype into the world's most popular social networking site, or the retiring of Windows Live Messenger in favor of Skype.

Simon Longbottom announced on the official Skype blog yesterday that Skype is becoming available on Microsoft's email platform Outlook.com. Both audio and video calling will be added to Outlook.com so that users of it can make use of those features right away. It makes sense from a user perspective, considering that it may sometimes be easier to call a recipient instead of sending email messages back and forth.

The feature will be rolled out in the United Kingdom first, with Germany and the United States following in the next weeks, and the rest of the world this Summer. Microsoft released a video that introduces the new feature, and it is the only source of information that we have right now - besides the blog post announcing the launch - that sheds some light on how Skype is integrated into the Outlook.com website.

The video highlights that users can use the audio and video chat capabilities of Skype on the site by clicking on the profile photos of contacts on the Outlook.com website. Here they also find options to compose a new message and chat (I think that's a chat symbol but can't verify) with the selected recipient. 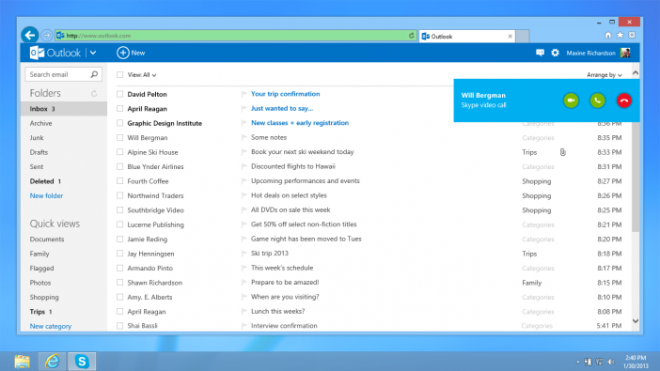 Technically, it is required to download and install a plugin that integrates Skype in to the browser. The plugin will be made available for Firefox, Chrome and Internet Explorer. Once the plugin is installed, existing Skype users will be asked to link the account to Outlook.com so that all Skype contacts become available here as well.

Adding video and voice chat capabilities to Outlook.com makes a lot of sense as it is often easier and more convenient to call than to write email messages. The plugin requirement may keep some users from using the new feature though.

Update: Microsoft made Skype the exclusive chat and voice communication tool on Outlook.com in 2015 Martin Brinkmann is a journalist from Germany who founded Ghacks Technology News Back in 2005. He is passionate about all things tech and knows the Internet and computers like the back of his hand. You can follow Martin on Facebook or Twitter
View all posts by Martin Brinkmann →
Previous Post: « Microsoft: AV-Test study that Bing serves 5x more malware is inaccurate
Next Post: Windows 8 and Internet Explorer 10 up both in April 2013 according to NetMarketShare »