App downloads jumped by 60% over the Holidays

Christmas was a good week for all of us, but a great week for apps with analytics firm Flurry reporting a 60% leap in app downloads on the previous week.  The figures which cover smartphones and tablets for just iOS and Android operating systems estimated that 6.8 million iOS and Android devices were activated on Christmas day with 242 million app downloads.  Over the whole Christmas period they estimated that some 1.2 billion apps were downloaded to devices with 20 million new devices activated.

The report said that "the last week of 2011 was the largest week for device activations and app downloads in iOS and Android history."

This shouldn't come as any major surprise to people though as many people would have received new tablets and smartphones for Christmas, but also that app stores had a great many cheap deals on over the holiday period.  Even so, these numbers are huge and very clearly indicate that our hunger for smartphones and tablets isn't going away any time soon.

When you factor in the number of people who would have picked up cheap Blackberry Playbook tablets over the holiday period we can expect activations to be much higher. 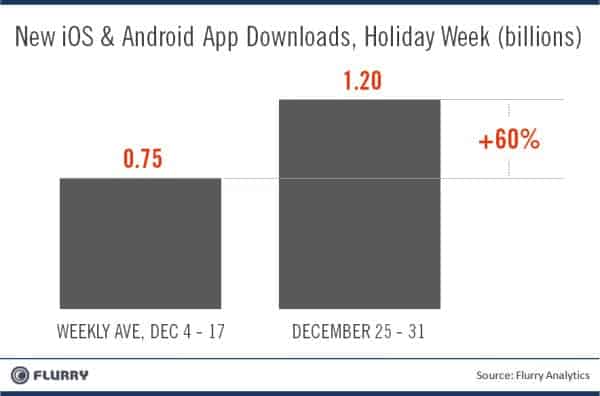 Flurry, which gets its data directly from Apple and Google said...

Looking forward to 2012, Flurry expects breaking the one-billion-download-barrier per week will become more common-place.   While iOS and Android growth continues to amaze, the market is still by all measures relatively nascent.

It's very likely that they are correct and that 1 billion app downloads a week worldwide will not just quickly become the norm, but that the number by the end of 2012 will in fact be considerably higher.

Factor in the launch of ARM-powered Windows 8 tablets, now probably scheduled for early 2013, and that number will rise exponentially as people try out Metro apps for the new operating system.  It is a reasonable predication though that by the time this happens the weekly app download figures for iOS and Android will have exceeded 2 billion a week.

Mike Halsey is a Microsoft MVP (Windows Expert) and the author of "Troubleshooting Windows 7 Inside Out" from Microsoft Press, "Office 365 Security Essentials" and several forthcoming books about Windows 8. He is a recognised Windows expert having been awarded a Microsoft MVP (Most Valuable Professional) certification in 2011. You can follow Mike on Facebook, Twitter, Google+ or on his own website The Long Climb
View all posts by Mike Halsey MVP →
Previous Post: « Pokes, How To Display Them Again on Facebook
Next Post: iMacs were one in three of all-in-one PC sales in Q3 2011 »