Not everything that security company Avira did in recent times has received a positive reception by the company's user base. Especially the bundling of the software with the Ask Toolbar has been […]

Time to malware-scan new PCs before first use

You have probably heard about PCs being infected in China with malware in factories as part of the manufacturing process. If you have not, I suggest you read The Guardian's article first […] 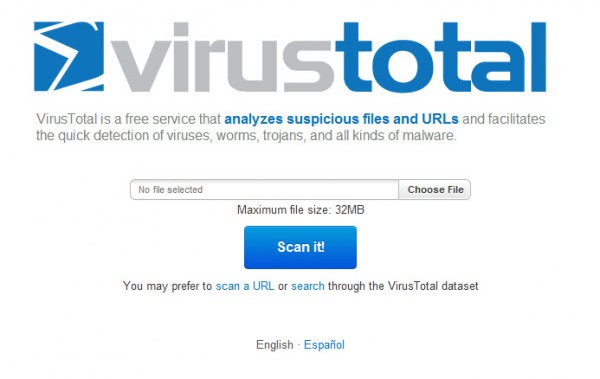 My go to service for scanning individual files online for malicious code is VirusTotal. It scans files that you upload to it with 42 different antivirus engines that include the majority of […]

How to uninstall the AVG Security Toolbar

AVG Technologies AVG Security Toolbar is included in the company's latest range of security software, as a standalone application, and as a third party offer included in the installer of software such […]

After Stuxnet, Flame and Duqu comes Gauss, another highly-targeted malware

If you are into math, computers or computer games, you have probably come into contact with the Gauss name. If you are living in the Middle East, or are one of the […]

Avira, the company best known for its Free Antivirus program, has just made available a technical preview of Avira Protection Cloud, a new cloud-based antivirus solution that is leveraging the cloud and […]

Kaspersky Security Scan: Get a second opinion on your PC's Security State

Even if you are running security software that gets regularly updated by its development company, you run the risk of falling prey to dangers that lurk behind every corner on the Internet. […]

The FBI back in November managed to close down a botnet that was created with the help of a malware called DNSChanger. In operation since 2007 it grew to a size of […]

We all know that there is not a single antivirus software on the market, either free or commercial, that detects 100% of malicious software. Some users help themselves by adding additional layers […]

Of all the smartphone and tablet operating systems available at the moment, the one that I simply can't recommend to people is Google Android.Â  Unlike Apple, Microsoft and some other companies Google […]

Windows XP Has 10-Times The Infection Rate Of Windows 7

Fake antivirus software has been on the rise in the past years. The term refers to malware that disguises itself as system protection software. Some of those programs fake malware infections to […]

It is the time of the year again where security software developers are pushing out updates for their products that increase the version or year by one. Avira has just started the […]

It was only a matter of time until a security company would come up with an ingenious idea to increase their market share. The first company to do just that is Agnitum […]

Use Exclusions when Antivirus Software is Slowing down your PC

While it is essential to protect Windows PCs with antivirus software, one of the drawbacks of doing so is that it can slow down the PC. While that depends largely on the […]

Your Computer Appears To Be Infected, On Google Search

A computer with a malware infection causes serious troubles for its owner or the current users, especially if they are not aware of the infection. The danger itself depends largely on the […]

Like many other security software companies, Avast is offering both a free basic version of their software and a commercial advanced version that comes with extra features. Avast Internet Security is the […]

Free products often have a much wider reach than commercial software. This may be especially true when it comes to security software for the PC. This in turn makes the programs ideal […]

Have the biggest players dropped the ball on AV Protection?

The latest anti-virus test figures for Windows 7 are out and there are a good few shocks to be seen in the results. In the tests performed by AVTest, BitDefender has leapt […]

The idea to scan files with multiple antivirus engines is not new, online portals such as Virustotal offer that feature for quite some time. If you look at desktop applications you notice […]

Avira DE-Cleaner is a new specialized security software from the makers of the popular antivirus software AntiVir. The program has been designed as an on-demand virus scanner that can be installed or […]

Sometimes you may not be sure if a local file is safe to execute even with an up to date antivirus software installed. It can then be reassuring to scan the file […]

When in doubt verify. That's one of the maxims that I use daily to avoid running into troubles. That's especially true for files and programs that I want to test and run […]

Many antivirus companies offer free rescue disks to provide their customers with an option to disinfect a system from the "outside"; in other words, an option to boot using the rescue disk […]

No, the BBC isn't trying to subsidise its coffers by branching out into cyber-crime.Â  As an experiment the British public-service broadcaster wants to know just how secure smartphones really are. The malware […]

Some computer viruses disable system specific features to make it harder for the computer user to detect and remove them. Most people will understand that something is wrong if the Windows Task […]

Panda Cloud Antivirus made quite an impact in 2009 when it was officially released after an initial beta testing period. The cloud driven antivirus solution combined effective virus protection with a smaller […]

A common rule for Windows users is to install and use only one antivirus software solution at a time. Most developers ask the computer user to uninstall other security software before the […]

Reports about a WordPress hack affecting self-hosted WordPress blogs have appeared on the Internet in March. The hack seems to affect WordPress 2.9.2, the latest version of the blogging platform, and maybe […]

Update: The most recent versions of Avira don't display the popup advertisement anymore. The software reviewed in this article is only useful if you are still using older versions of the application […]

NoVirusThanks Is A Virus Total Alternative

NoVirusThanks is a free service similar to VirusTotal that allows you to upload files to the service to have them scanned against multiple antivirus engines. Virus Total is one of the most […]

We've covered a few Linux antivirus tools here on Ghacks (see "Install Avira Antivirus on Linux" or "Rescue that infected Windows drive with Trinity Rescue" or the articles covering ClamAV). All of […]

Sticking with our current theme ofÂ rescuing, we will now focus our magnifying glass another another useful Linux tool - Trinity Rescue Kit.TRK is another live Linux distribution, but with a different spin. […]

In yesterday's post (see "Scan a Windows drive for viruses using Linux") in which I mentioned the Avira Antivir software. This piece of software is a commercial, cross-platform anti-virus solution that offers […]

The Cleaner was one of the few solid programsÂ back in the good old days to clean malicious software from a Windows computer system. It somehow seems to have lost its appeal to […]

Malware is a generic term for trojans, viruses, worms, keyloggers, rootkits and other malicious program code. Avira posted on the official company blog interesting statistics about malware that gets distributed using url, […]

Scan your Linux machine for viruses with ClamTk

What do you mean - "scan your Linux machine for viruses"? Linux is immune to viruses right? Well...mostly. Even though a proof of concept virus has been discussed, and nothing has actually […]

Avira has published a top list of brands that experienced the most phishing attacks in 2009. The top 3 brands according to Avira's chart are PayPal with 32205 threats followed by Chase […]