Avira, the company best known for its Free Antivirus program, has just made available a technical preview of Avira Protection Cloud, a new cloud-based antivirus solution that is leveraging the cloud and swarm technologies. It is not clear at this point in time if the technology will make their way into existing Avira products, or if it will be available as a standalone product. In the latter case it would be similar to Panda's Cloud Antivirus offering.

The program creates a list of locations that are frequently targeted by malware including running processes, start-up items and Windows services. It then creates a digital fingerprint of each file and submits the generated hash to the cloud where it is then looked-up and classified as clean, malware or unknown. 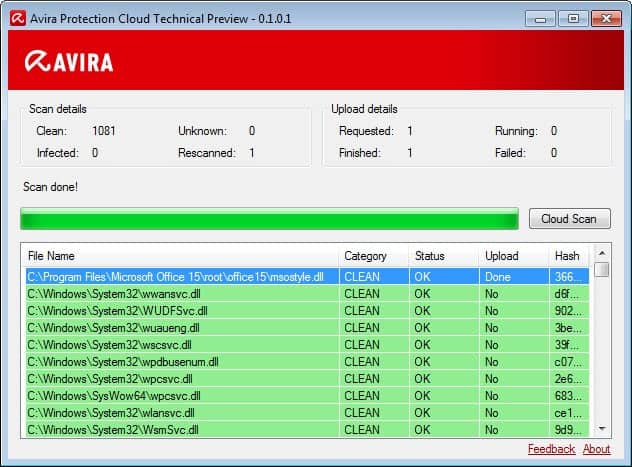 Clean files are listed in green in the program window and highlighted as clean in the category column as well. The program uploads unknown files to Avira automatically where they are scanned using the latest version of the company's antivirus engine before the result is returned to the user PC.

Note: There is no option to disable the upload functionality or make the program display an upload prompt instead. Only executable files, e.g. .exe or .dll are uploaded to the cloud though.

Avira Protection Cloud creates a log file in the program directory that you can access to review the program's findings after it has been closed.

The advantages of this method are that the program consumes little system resources and is not as taxing to the PC as conventional antivirus solutions during scans. The cloud also ensures that virus definitions and digital fingerprints are always up to date.

The downsides are that an Internet connection is required to submit the file hashes to the cloud, and that some files may need to be uploaded to the Internet with no option to prevent that from happening. Probably the biggest downside is the dependency on the cloud servers as the program becomes useless if they are down or unreachable.

The antivirus solution runs on all versions of the Windows operating system from Windows XP SP3 on, and requires the Microsoft .NET Framework 4.0 and the Microsoft Visual C++ 2010 Redistributable Package.

It is likely that Avira will improve the technology over time to make the program more comfortable to work with. This should include a much needed option to block automatic uploads. It will be interesting to see if the company integrates the technology in existing security products, or if it will make it available as a standalone product once it leaves the beta phase.

Martin Brinkmann is a journalist from Germany who founded Ghacks Technology News Back in 2005. He is passionate about all things tech and knows the Internet and computers like the back of his hand. You can follow Martin on Facebook or Twitter
View all posts by Martin Brinkmann →
Previous Post: « Increase your Microsoft Office productivity with KeyRocket
Next Post: MultiMonitorTool: Improve Multi-Monitor support in Windows »