Free products often have a much wider reach than commercial software. This may be especially true when it comes to security software for the PC. This in turn makes the programs ideal candidates for companies like Ask or UniBlue who want their applications to be installed on as many computer systems as possible.

Avira recently made two business decisions that may have a huge impact on the company's public perception. The Ask Toolbar will be rolled out to all free users soon, the UniBlue promotion has already taken place for users in the United States.

Probably the biggest issue that users have with the Ask Toolbar is that Avira suggested to clean that toolbar if found on PCs in the past, according to information posted on DSL Reports. I cannot verify that claim and you should take it with a grain of salt.

Even worse, the toolbar is advertised as a new function called Safe Internet searching. It has been re-branded as the Avira SearchFree Toolbar and works with Internet Explorer and Firefox.

Many inexperienced users may be inclined to install the toolbar, considering that it is supposed to make their Internet searching safer. 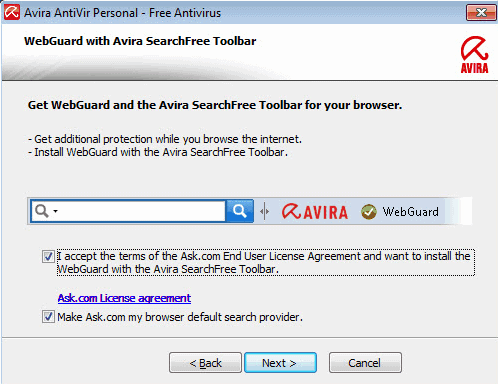 Free users get the web guard component activated in Avira if they install the Avira SearchFree Toolbar. The component will only be available as long as the toolbar is installed on the system.

Avira notes that the toolbar is installed in an opt-in process. Existing users get a notification about a new function eventually. This notification pops up at the bottom of the computer screen. Note that you can select Install Now or Install Later, but not to say no to the installation. 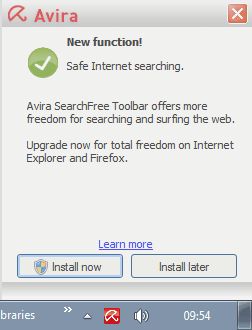 A click on Install Now opens the installation dialog. The toolbar is not selected by default. Users need to check the "I accept the terms of the Ask.com End User License Agreement" box to do so. If they click Next without enabling that feature nothing will change. If they do, they see the new AntiVir WebGuard module listed under installed components. It is not necessary to make Ask the default homepage to receive the WebGuard module.

There has already been some backlash from users, for example at the Web of Trust forum.

I can understand bundling with an installer to try to create revenue, however bundling with someone that you had once listed as malware... and then removing them from the database is just like saying "Yes, we are for sale... but trust us we won't let anything bad happen to your systems."

This happened to me this morning. I went to do my weekly scan & after doing the scan I did an update which must have been the service pack because it was quite large. Then this popup announced webguard & the Avira toolbar. There is no way to say no. All the popup says is "install now or install later". No choice to install webguard without the toolbar. So I am simply closing the popup whenever it shows up.

Other sites where the issues are discussed are the DSL Reports forum and Wilders Security.

I personally do understand that companies want to make as much money as they can and that it can be very tempting to bundle software with free products to do so. What Avira may have neglected to consider is the negative perception of both partner companies on the Internet. It is usually the tech savvy users who get frustrated with a product and stop using it. This also means that they stop recommending it which could in the long run reduce Avira's market share.

Are you currently using Avira products? If so, what is your take on the situation?

My thanks goes to Nico who submitted the news via email.

Previous Post: « How To Delete Virtual Drives After Software Uninstallation
Next Post: Google Wants to Know What You Love »