Who would have thought that grading papers can be that much fun. I suppose this is no game for teachers or students who grade papers on a regular basis. Everyone else though may enjoy a round of Grading Game in which you pay off your student loans by grading papers for campus professors.

The game itself is pretty straightforward once you have endured the prolonged loading of the game, which even on my fast line and system took a noticeable amount of time.

It basically consists of a series of emails that you receive from professors asking you to "pay it back" to students who wrote about the professor on The Face Book. 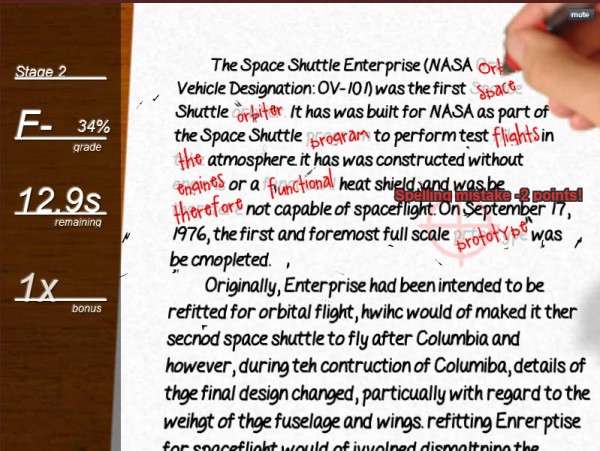 The game itself gives you a certain amount of time to grade a paper, which you do with your mouse and the WASD keys. You basically move the mouse cursor, depicted by a cross hair, over a word or phrase and left-click on it toÂ  have it corrected. The game is all about error spotting - both spelling and grammar -Â  and not about correcting the errors by yourself which may be a relief as it would reduce the pace of the game significantly.

Depending on whether you are right or wrong, you are awarded with bonus points if you are right, or not, if you have tried to correct an error that was none.

You can also see the grade of the student drop with errors that you find in the paper, and it appears that you need to have the grade get dropped by a certain amount to avoid getting fired by the professor. If you are indeed getting fired, it is game over and you can submit your score if you want.

The game gets a bit repetitive after you have corrected a few papers as there are no new game elements added in later stages that would add some much needed variety to the grading of papers. The game designers options are obviously limited in this regard, but a little bit of math thrown in for instance could really improve the quality of the game for instance.

Grading Game offers a rather unique concept that I have not seen before in a game in this form. I only wished the developer would have added more variety to the game, and maybe a time-less mode for players who just want to spot all the errors without being constantly reminded that a ticker is running down that prevents them from doing so.