You are on the run. You do not know why or how you got into the situation, only that you need to get as far away as possible. They send people after you, to catch you, and if they do, it won't be pretty. It appears as if you have broken out of prison or a comparable facility, at least that's what the sirens at the beginning seem to hint at.

It is winter and snowing, movement takes lots of strength, and the people behind you have flashlights which they make use of to spot you. All you see in the beginning is snow, some trees, and a house that is not that far away, and it is likely that you will start moving towards that house, as it is faced directly opposite to the people trying to catch you.

You do not really know what you are doing in the game, other than running away and hiding from the people that are trying to catch you. The first house that you reach has a clue, a plaque, but it is not really clear what it means, only that it must be important as it is the only thing that stands out in the environment. 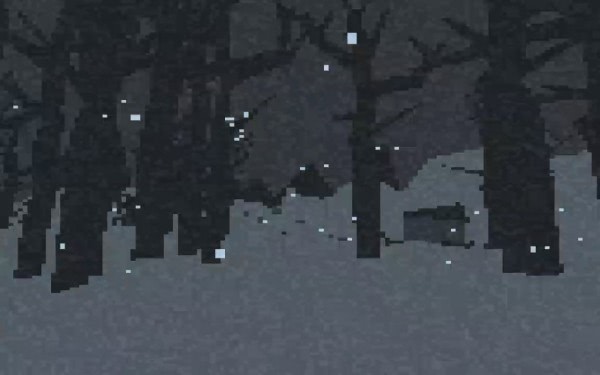 The game controls are simplistic like the rest of the game. You use the arrow keys on your keyboard to move. You can sprint with a second tap on the up key, but that is it as far as controls go.

Graphics, as you can see, look like they have been taken directly from an 8-bit or 16-bit era video game, and while that may not be appealing to all, it adds a retro feeling to the game that is very similar to what games like Minecraft managed to create as well.

Sound-wise, you mostly hear your own breath and foot steps as as you make your way through the snow. You do hear the sirens at the beginning, and the people that hunt you when they are coming closer.