Tower defense meets space action. Enigmata Stellar War is a brand new Flash game that has been making the rounds lately. In it you control the defenses of a space station to fight off attacking enemy spaceships that try to destroy it. For that, you build ships around the station to combat the enemy ships before they can damage the station.

You can place your ships freely around the station, and even move them around if the need arises. The first level acts as an introductory mission explaining the basics of the game. This includes placing and moving ships, unlocking new ships and items that give you more power and options, using special attacks, and defeating enemy motherships at the end of each mission. 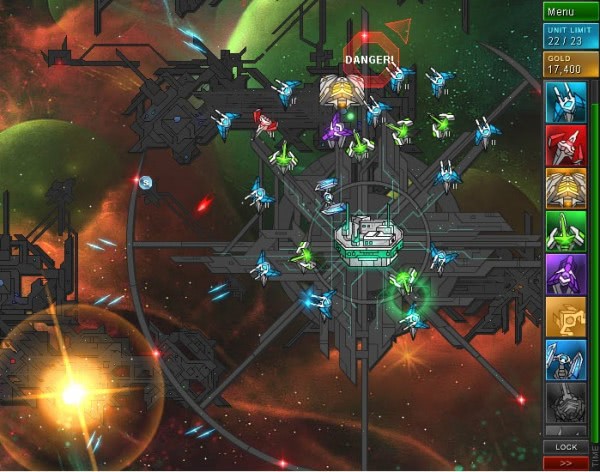 You start with two ships that you can build, and need gold to unlock advanced ships. This includes the essential healer ship with restores shields of ships in reach, and ships that have different attack types and ranges. While it is certainly possible to complete the first few missions of the game with an assortment of basic ships and healers, you will eventually come into a situation where you need to spend lots of gold to unlock advanced ships that give you an advantage.

You are awarded with a skill point after each level which you can invest into skills that increase your unit's attack power or healing among other things.

Ships gain in ranks and can be upgraded with three different features that depend on their ship class. The healer ship for instance can be upgraded to increase the hitpoint of all ships in range, while fighter ships may get an additional hitpoint increase of their own, or an experience boost instead.

Since you are attacked from every possible angle, you need to make sure that every side of the base is protected by your own ships. This can get quite hectic at times when a large swarm of enemy vessels is incoming at a weakly protected side, as you now need to move ships from other locations to the side to strengthen your defenses there.

You also need to scroll the game screen, as you are not seeing everything on the screen. This is done with a left-click and a dragging motion, and essential to beating the game. Add to that the need to collect gold that enemy ships leave behind with the mouse (or by sacrificing attack ships for gold collecting ships).

Enigmata Stellar War is a fun game to play, at least for a while. I personally think that it lacks somewhat in the diversity department. Once you have established your forces, missions start to become somewhat repetitive. Still, if you fancy a game of tower defense in a different setting, then this one may be just what you are looking for.