Civilization Wars is a fast paced real time strategy game in which you try to become the dominating tribe in battles for land. To become that, you need to conquer every tower and shrine of a map so that your civilization remains the last standing one on it. Once you have achieved that goal, you can advance to the next game map or select to play an already conquered map in a different game mode.

You usually start with a single tower on the battlefield that produces new troops over time automatically. You can now send your army from that tower to another tower or structure on the map to conquer or strengthen it. This is done with a simple drag and drop operation that works fine most of the time. When you hold down the mouse, you can include other units from other towers in the move. 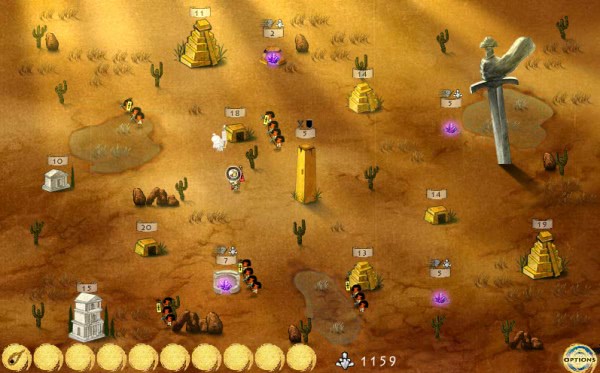 The core idea here is to protect your own towers from being taken over by the computer while at the same time expanding your own territory to increase production of new units. There are different types of buildings in the game. When it comes to towers, you get them in different sizes. The sizes determine the maximum number of units a tower can hold at anytime. Production ends when the level is reached. The situation is slightly different for defensive towers on the map. They do not produce units but defend an area on the map by shooting at enemy troops that enter it, and by being more difficulty to conquer.Â  The third and final tower type is the shrine. It produces crystals but no units. You use crystals to cast spells, for instance lighting or fire on enemy troops, a swamp to slow down the advanced of troops and so on. You can stack 50% excess units in a tower for a short while which slowly count down to the allowed maximum.

Since the game is called Civilization Wars, there are different civilizations in the game, each with their unique strengths and weaknesses. Of the three available civilizations, one is slightly stronger, one slightly faster, and one average in all regards.

You are awarded experience points after each map that you have successfully conquered. These help you level up which in turn gives you skill points that you can use to add spells to your arsenal, make existing spells more powerful, or improve your units skills in a way. Additional map modes become available once you reach certain levels. These modes offer some variety in game play, and may award you with more experience points

Every now and then you reach a level where you not only have to defeat one or two computer enemies but also a boss of sorts. These maps are always interesting to play, as you first have to take care of the enemy civilizations as fast as possible to defeat the boss in time. Yeah, there is a time limit here and you have to try again if you do not defeat the boss in time. 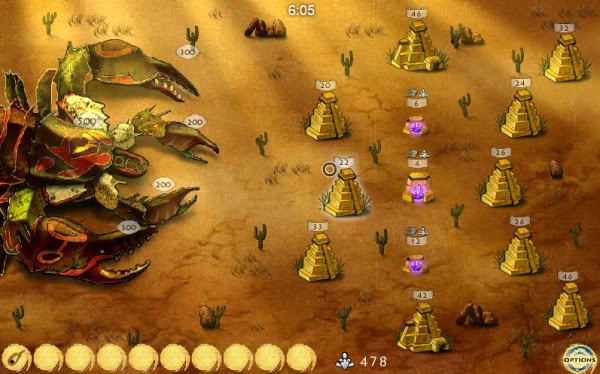 Civilization Wars is definitely one of the better Flash games. It offers lots of variety, various game modes, different civilizations that you can play, skills and lots of maps. Each map can be completed in a few minutes which makes it an ideal game even if you do not have lots of time. That is, if you like real time strategy games like this.