DVDFab Passkey Removes DVD And Blu-Ray Protections On The Fly

DFDFab Passkey Lite is a free program for Windows that removes protections of inserted DVD and Blu-Ray discs to make those accessible and playable on the device.

Many video DVDs and Blu-Ray discs use protection to prevent the reproduction of media files found on those discs. This often prevents creating a copy of a movie even if it has been purchased legally, but may also limit playback at times. Users often face two different protections on discs, not just one.

The first is a copy protection that has been added to the disc to prevent that its contents are copied (or backed up). The second is a regional encoding which can cause all kinds of troubles for users as it can prevent the playback of a movie or video. A movie DVD purchased on the last trip the US for instance might not play on an European DVD player.

This can be extremely troublesome if you move to another region permanently or at least for a longer period of time, as you may not be able to play media bought in the new region on a player that you bought in your previous region (or play media bought in the old country using a new player). While you can now go ahead and import all discs, that is probably not the best option considering that it takes longer and is more expensive. Plus, you may not be allowed to import certain media at all. 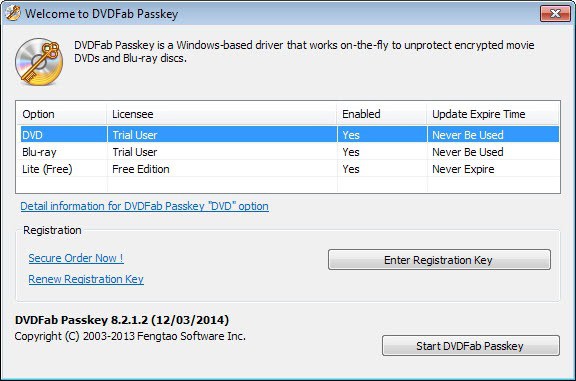 DVDFab Passkey is a software that runs as a Windows driver in the background. It will automatically remove protections from DVDs and Blu-Rays so that these discs can be copied and played regardless of their protection or regional restrictions.

This approach ensures that all programs can access the contents on the DVDs and Blu-Rays.

Here are the core features and benefits of DVDFab Passkey:

DVDFab Passkey is currently offered as a free version, called DVDFab Passkey Lite.  The software program is compatible with 32-bit and 64-bit editions of most Microsoft operating systems including Windows XP, Vista and Windows 7.

Two commercial programs, Passkey for DVD and Passkey for Blu-Ray are provided as well. These add other functionality, notably the option to rip movies to the local system, to the program.

Martin Brinkmann is a journalist from Germany who founded Ghacks Technology News Back in 2005. He is passionate about all things tech and knows the Internet and computers like the back of his hand. You can follow Martin on Facebook or Twitter
View all posts by Martin Brinkmann →
Previous Post: « Windows User Profile Relocator
Next Post: Cure Sleeping Problems With Bedtime Help »