I have been using IRC quite a lot a few years ago and even then thought that software like MIRC was not ideal for beginners. It was not that easy to setup and had the charm of a Windows 95 application written all over it.

While MIRC is a powerful application that offers a lot of functionality, beginners usually have troubles configuring it properly.

I did switch to Chatzilla eventually which offered IRC access in Firefox as an add-on which was really great when I had to connect to IRC quickly as I could do so without having to open another progrma to do so.

IRC can be best described as a big chat network that supports file downloads as well. Servers like Dalnet, Undernet and Quakenet host thousands of channels of all topics including coding help, game talk, cooking, flirting and downloads. I use it mainly to get an answer to a coding question that I have because you always find some experts that are most of the time happy to help you out.

Talkative IRC is a solid tiny IRC client that is best suited for users who do not want to fiddle around with settings all the time.

Connecting to an IRC server is just a click away, it takes some time to find the right server for your needs but once you are in you should begin downloading the groups that are hosted on the server. 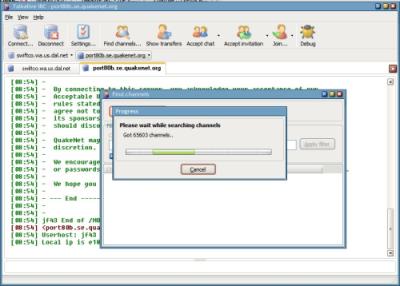 Those groups can be filtered afterwards and useful ones can be added to favorites to make it easier to connect to them the next time you are online. Commands are also supported which means that you can for example join a group directly with /join #groupname.

Talkative IRC can be configured to join groups automatically during program start. New networks and servers can be added as well, by default only seven networks are listed.

Update: Please note that the client is no longer maintained by its author. The website it was hosted has been dropped as well. We have uploaded the last working version of it to our own server. Keep in mind that this program has been last updated in 2008, and that it may not work properly anymore on newer versions of Windows.