Listen to online radio stations with VRadio; a portable application for Windows

When I was younger, I had a portable radio which was the size of a Walkman. It was probably due to that I really enjoyed listening to the radio on my Nokia phones. 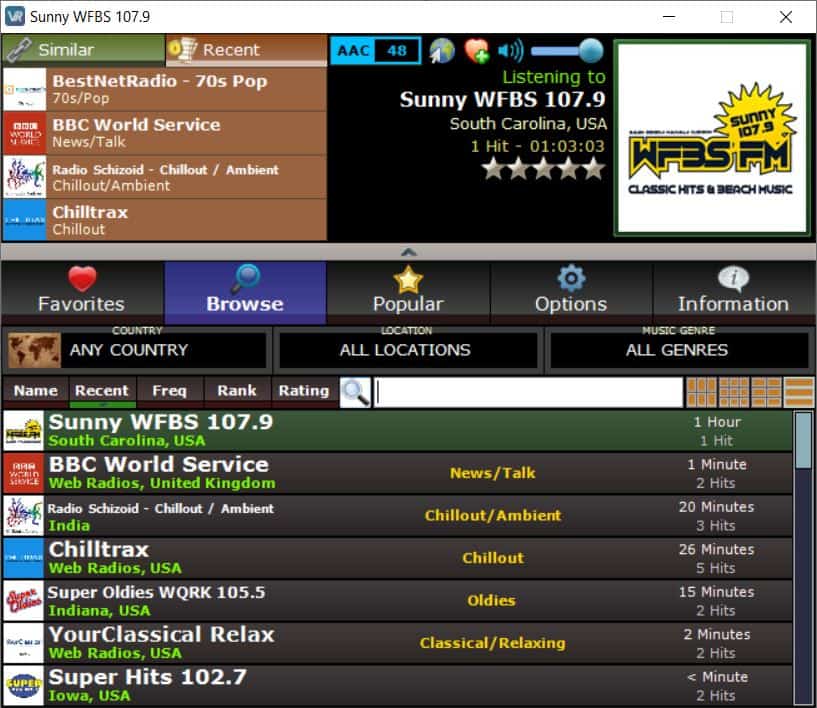 Now we have Spotify, Apple Music and other music streaming services, but radio stations have a certain charm. It is a cool way to discover music without having to browse through playlists or genres. VRadio is a portable application for Windows that provides a way to listed to online radio stations.

Tip: we reviewed other radio programs for Windows in the past. Check out recent reviews of Tray Radio, PCRadio, or RadioMaximus. You may also find out Internet Radio recorders overview useful.

The extracted archive contains a single executable which is about 855KB. The program has a three-pane interface. The large pane at the bottom has five tabs. The interface looks a bit dated but that does not impact the functionality that it provides.

The Favorites tab lists the radio stations that you liked. You can export (backup) the list as a JSON file, and import it back to the program. Don't worry if your favorite station isn't included in VRadio, you can use the "Add Station" option under the favorites tab to include new station. Give it a name, include the station's stream URL, website address and select its logo (PNG/JPG/JPEG formats) and save it. VRadio has a ton of radio stations in its database. Switch to the Browse tab to access it. Select the Country, Location or Music Genre drop-down menus to browse the list of available stations. The list can be sorted by name, recent (recently played), frequency, rank and rating.

The popular tab in VRadio displays the stations that were trending yesterday, last week and last month. 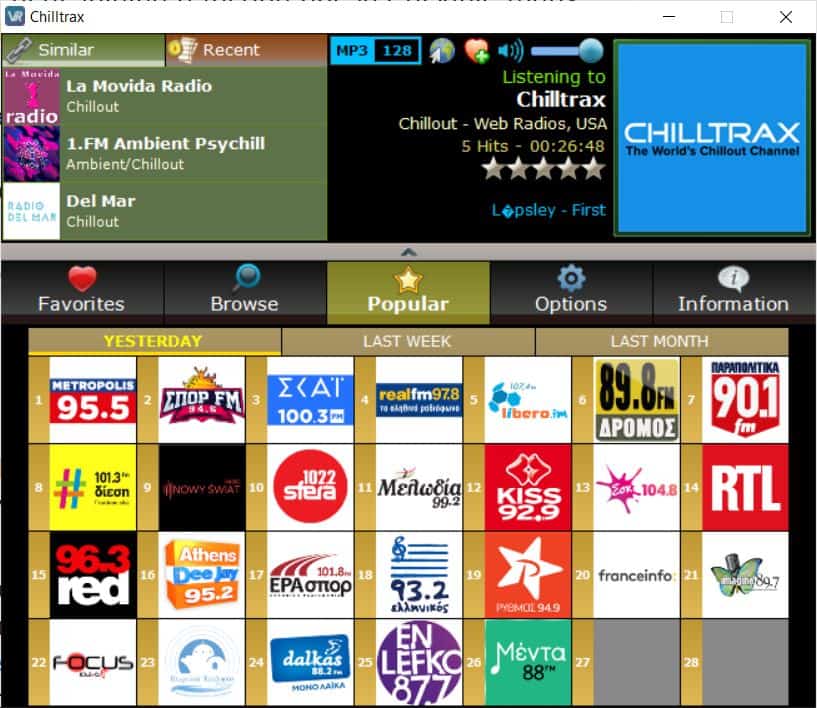 The icon with the mouse pointer may be used to visit the radio station's website, while the heart icon adds the station to your "Favorites". Adjust the volume of the playback by using the slider.

VRadio lists radio stations similar to the one that you're listening to, in the pane at the top left corner. The Recent tab lists your recently played stations. It does not save the history permanently, so its only useful for the current session.

The program continues the playback even when the computer is locked or in sleep mode. The bottom pane i.e., the Radio Stations list, can be collapsed by clicking on the arrow at the top of the pane. Mouse over a station to view the currently playing track. This doesn't work for all stations, I believe this depends on whether it supports RDS (Radio Data System). If you have ever listened to FM Radio on your old phones (Nokia handsets), you have used an option called RDS. This system is used by radio stations to send some data through their broadcast, and included the current track info, artist info, etc. 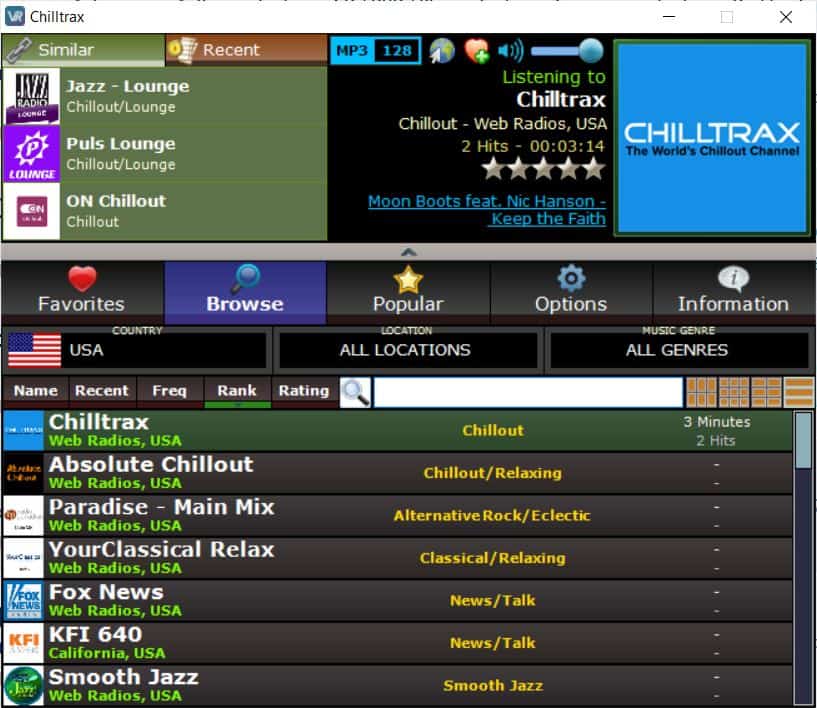 VRadio supports searching YouTube for the currently playing track. But, this depends on the RDS feature. If a station supports it, you'll see a web-URL appear in the top right pane (just below the star rating). Clicking the URL takes you to the YouTube search result page with a query based on the track name. 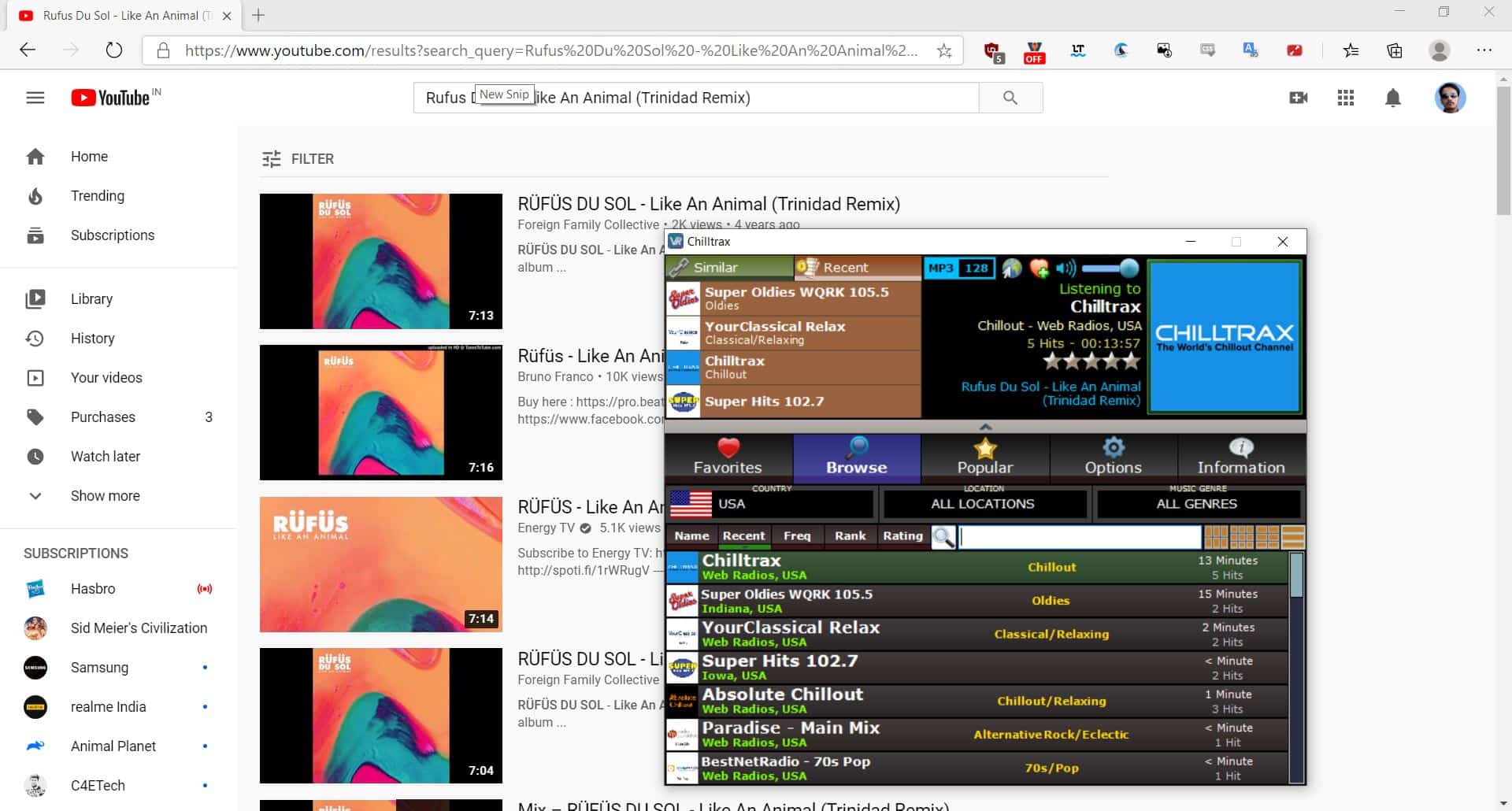 The flag icons of many Countries, and the logo of several Radio stations were missing during the first few runs of the program. Close and restart VRadio and it should fix the issue. The program automatically rates radio stations, and you may want to disable this from the Options tab, because it gives everything with a 1-star rating. 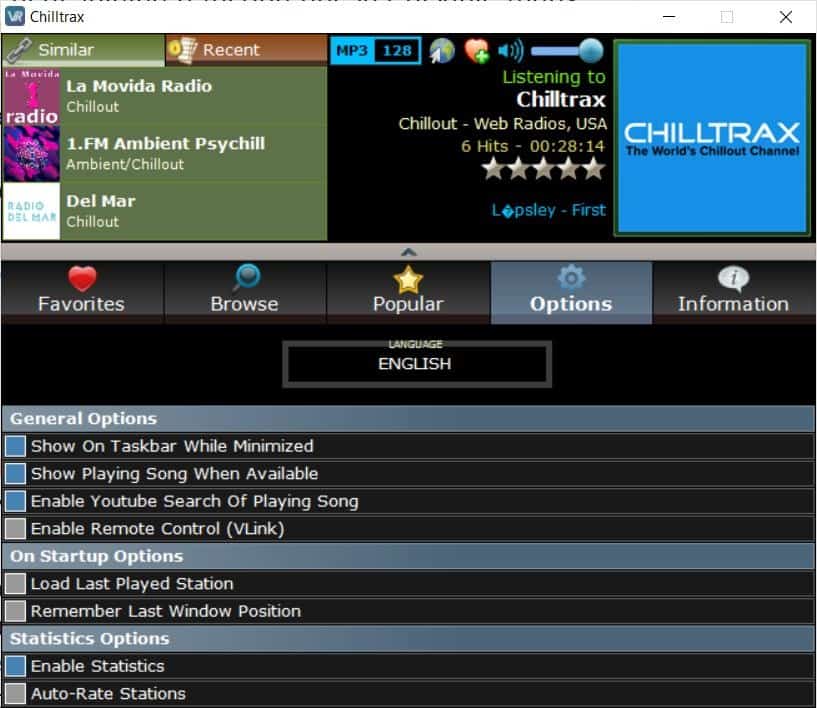 VRadio is also available for Android devices. The mobile app has some additional features such as the option to record the playback, support for Chromecast, UPNP/DLNA, Android Auto controls.

Warning: VRadio has 3 detections on VirusTotal, two of which are confidence scores (based on the number of users). You can ignore it since the program isn't very popular.

The program requires .Net 3.5 to run. It is compatible with Windows XP and above.

VRadio was able to play all local/national radio stations I tried. There were some occasional hiccups when it had to buffer the content from a few foreign stations, but this is likely due to geolocation issues (distance to server, server quality, etc). Some radio stations don't offer international streaming, you can't bypass such restrictions with the program, however using a VPN can help you.

I didn't use a VPN while using VRadio, but was still able to listen to several foreign stations without buffering, and I had no problems with the audio quality either.