Coupons, just like books, movies or music are slowly but steadily moving to the digital realm. While the majority of coupons are still delivered in newspapers, magazines and on paper in stores, a growing number of companies have started to offer printable coupons on their websites.

Digital coupon solutions are the next logical step because smartphones are available widely nationwide and offer manufacturers and retailers better data and control over the entire process.

Update: Zavers is no longer available.

Google announced the launch of Zavers (Savers) two days ago; the company's new digital coupon solution brings shoppers, retailers and manufacturers together on a digital platform according to Google's announcement.

Customers can save coupons that they find on retailer websites directly to their smartphone, likely by scanning a QR code or other code with the phone's camera or entering a code manually into the application.

The coupon is then added to the account of the customer and used automatically during checkout when a reward card or phone number is provided.

Retailers and manufacturers benefit from Google's solution in several ways. They can monitor data in real-time and get access to additional analytic information about customers that is not available when traditional -- read non-digital -- coupon solutions are used.

And the benefits for the consumer? It may speed things up for them during checkout as the scanning and sorting of coupons falls away. Google Wallet users benefit from integration of Zavers into the payment processing service.

Zavers is not a new service. In fact, Google bought Zave Networks in 2010 and is now releasing the product on its own again. You can still visit the original site and it is not clear what will happen to it in the future. The about us page is already redirecting to the Zavers by Google page.

It needs to be noted that Zavers launches in the United States and is not available in other countries right now. It is likely that Google will expand the market once it has established Zavers as a brand in the US. 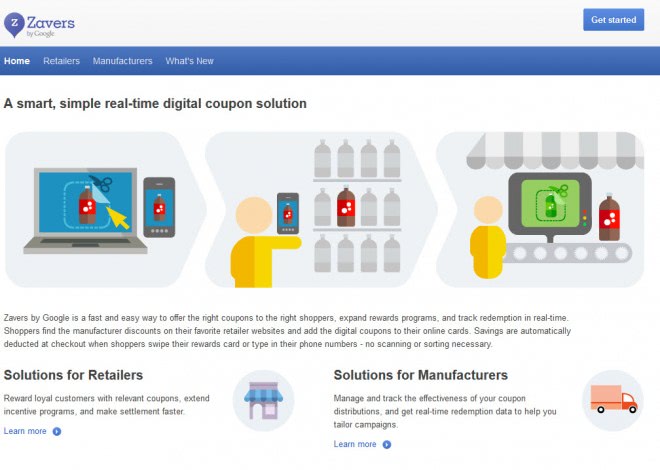