Angry Birds Star Wars is out

Rovio, the company behind the popular Angry Birds franchise of games, has released Angry Birds Star Wards today for Android, iOS, Windows Phone, PC and Macintosh systems. Not all versions seem to be available right now, the Windows Store app for instance is not listed yet on my system, while both the free and commercial version for Android are on Google's Play store.

The paid version of the game adds HD graphics to the game but still seems to use the same in-apps purchase options like the free version. More than 80 levels are available free to play and while the developers have not changed the basic concept of the game, they have added little things from the Star Wars universe.

The first addition is the story that you will notice immediately when you start the game. The game features cutscenes, the original Star Wars soundtrack, and plays in locations that fans of the series should be familiar with. You start your journey on Tatooine and play your way through other planets and spaceships, and even the Death Star. 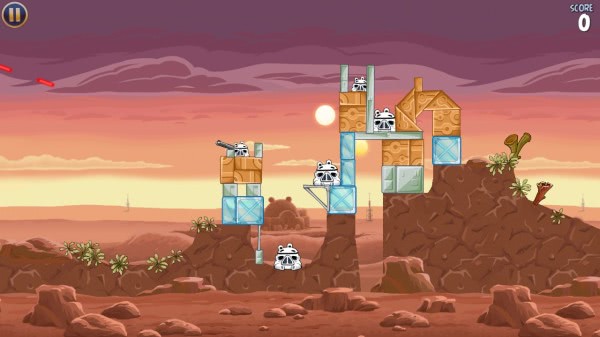 The task of the game on the other hand has not changed at all. You still use a sling to fire birds, and even some Star Wars guest characters like R2-D2 and C-3PO, towards Stormtroopers and other Empire soldiers so that they get touched either by the bird itself, by falling debris, or by special actions that some of the characters make available to you. The objective of the game is to hit all Empire soldiers with as few birds as possible.

Some features from Star Wars have been integrated into the game. The second bird that you get can for instance use force push once per flight while the third has a lightsaber that can be used to cut through all materials like butter. The Empire soldiers sometimes defend their position with blasters which are better to be avoided.

Here is the promo video that Rovio has created for the game:

While die hard Star Wars fans may cry out sacrilege over what Rovio has done to the Star Wars universe, new and old Angry Birds fans will certainly like the refresh of the series. User comments are very positive right now on the Google Play store with an average rating of 4.7. A minority of users seems to have issues running the game though judging from the one star ratings and the comments those users left on the store.