I have decided to bring back game reviews here at Ghacks by reviewing one, free game, every Saturday. I call it Game Saturday and it begins with a classic. The Streets of Rage series was extremely successful on the Sega Genesis. Sega released a total of three parts and ported it to other systems over time. Today you can play Streets of Rage on PC (it is for instance offered on Steam), the iPhone and at least some of this generation's entertainment systems.

Streets of Rage Remake has been in the making for over eight years, and while that is usually a bad sign, it is not in this case.

The developers have made the decision to not only remake the first part of the game, but provide their users with new game elements. This includes playable characters, enemies and stages that have not been part of the original series. 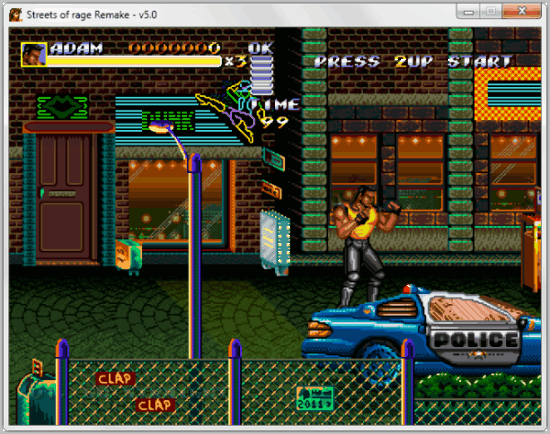 The developers could have very well called it Street of Rage Ultimate, considering that you can play every playable character of all three Street of Rage games plus some custom made ones. Even better, the designers have not stopped there. You get to play a total of more than 100 different levels, plus extra game modes like the famous police car bashing and some that you have never seen before.

And if you still have not had enough after playing through all of the levels and modes, you can make use of the editor to create your own stages and characters.

You can play the game alone, or with a human or cpu player at your side. Streets of Rage Remake supports both keyboard and gamepad controls which can be customized in the game's options.

The remake has been out for a few days and given Sega's reputation it is likely that the developer's will not receive letters from Sega's lawyers to take down the project. That's remarkable considering that many companies do not allow fan remakes at all.

Here is a video of the game.

For now, you can grab Streets of Rage Remake right from the developer site. The game has a size of about 218 Megabytes and is hosted on file hosting sites. It should run on most versions of the Windows operating system. (via Gameokratie)