Camera Downloader is a free program for Microsoft Windows devices to transfer photos from cameras to the PC.

Not all operating systems handle the downloading of photos from digital cameras that well as Windows 7. The operating system automatically recognizes the photos, and displays an option to transfer them to a location on the computer system, usually the My Pictures folder.

Some operating systems do not offer that feature which means that their users have to resort to the manufacturer's software, a third party software or manual ways of transferring photos.

Camera Downloader is such a third party software. The software has a size of only 37 Kilobytes and is fully portable. It comes with an xml configuration file that the user needs to edit before first run. Especially the local path for the saved photos, and the path to the photos on the digital camera's storage are important in this regard. 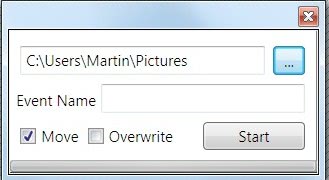 The program displays a small user interface whenever it is started that can be used to configure the photo transfer. It is there possible to change the target directory, select a folder name for the photos that are downloaded, and decide whether photos should be moved or overwritten.

Moving the photos will move them from the camera to the folder so that they are no longer available on the camera; overwrite overwrites any existing photos in the target folder regardless of whether they are dupes or not.

The program transfers photos only if the camera itself is recognized by the Windows operating system and mounted as a storage device.

Camera Downloader is a handy program for users who want to transfer photos from their digital camera semi-automatically. The portable software program can be downloaded from Codeplex.

Update: The Camera Downloader application is still hosted on Codeplex but it has not been updated since 2008. Newer versions of the Microsoft Windows operating system come with options to import photos automatically when you connect digital cameras, smartphones or tablets to them.

While you can still use the program instead, you may want to consider using the native Windows photo import app instead if it is available on your system.

The program itself is still fully compatible with recent versions of Windows including Windows 10.