AquaSnap is a free program for Microsoft Windows XP and Vista devices that brings some Windows 7 Aero functionality to those operating systems.

These features are not available in Windows XP or Windows Vista by default. The third-party AquaSnap brings those two features to those two operating systems.

The program features are called AquaSnap and AquaShake, and they port the features of the Windows 7 operating system to other versions of Windows.

The program ships with exact copies of the Windows 7 features, and enhanced versions of those features.

The program's AquaSnap for instance comes with four different modes with one being an exact copy of AeroSnap in Windows 7.

The remaining three modes add additional regions to the border of the screen. AquaSnap Simple for instance makes use of the bottom border as well so that it becomes possible to display two windows horizontally and vertically. This is topped by the advanced version that supports a total of eight different regions.

AquaShake mimics the AeroShake option of Windows 7 by default, but supports an advanced version so that one window remains always on top. Several sliders are provided to change the opacity and shake detection on top of that.

The third feature of AquaSnap is a glass effect. This is turned off by default and will introduce Glass-like effects on older versions of windows.

Update: Even Windows 7 users may want to consider using the program as it extends the functionality of Aero Snap that is provided by their operating system natively. the software is offered as a portable version and installer at the developer website.

One interesting feature of the program is window tiling.Once you have snapped several windows to each other, you can resize them all in a single operation holding down the Ctrl-key on your keyboard while resizing them. The same method is used to move multiple windows as well. Just hold down the Ctrl-key before you start to move windows to move all snapped windows at once. 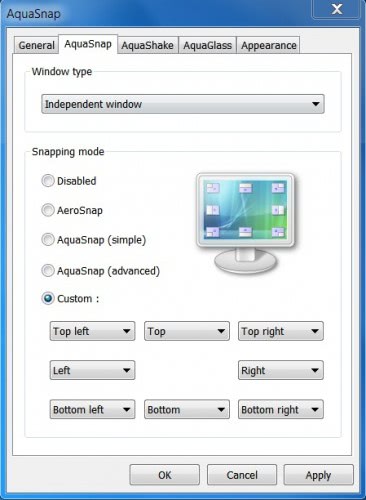