One add-on that I do not want to live without anymore is the Fox Clocks add-on. I initially only installed it in Firefox where it displays the current time in the status bar with the option to hover the mouse cursor over the clock to see additional timezones that have been configured.

That's great for users who work without taskbar on their computer system as they always have a clock in view. I recently discovered that the add-on is also compatible with Thunderbird.

The core functionality of Fox Clocks remains the same but the display is different in the email client.

Fox Clock will add clocks to the Thunderbird status bar. Those clocks - unlike in Firefox - will be displayed next to each other in the desktop email program. This is more comfortable as all clocks are visible all the time opposed to the one clock that is visible in Firefox.

The add-on comes with additional options to configure the time format, position and style, time zone data and more.

That's another positive aspect of the add-on when compared to its Firefox counterpart. The clocks can be displayed on the left or right side of the Thunderbird status bar. An alternative is to display them as a toolbar instead which could then be placed in the Thunderbird header area.

You can add as many different time zones as you want to the extension either by browsing the "time zone picker" or by using search.

These become available automatically from then on in the program.

Fox Clocks in an helpful add-on for email users who regularly correspond with email users from other places in the world as you see on first glance if you can expect a response right away or not.

Thunderbird add-on is compatible with all versions of Thunderbird. It can be downloaded from the official Mozilla Thunderbird website. 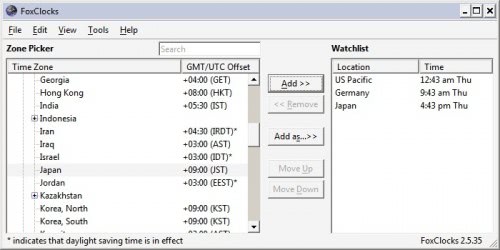