JPEG & PNG Stripper is a free program for PCs running Microsoft's Windows operating system that you may use to remove metadata from image files.

Many image formats support so called metadata embedded in the files. Metadata may include all kinds of information: it can include the digital camera model that has been used to take the photo, the editing software used to edit it, time and date the picture was taken, or GPS information that tell anyone where the image was taken.

Metadata takes up disk space; this can be a few bytes to Kilobytes per image which can accumulate to Megabytes easily.

Metadata in images is problematic for two reasons therefore: it takes up disk space and it may reveal information that you want to keep private. 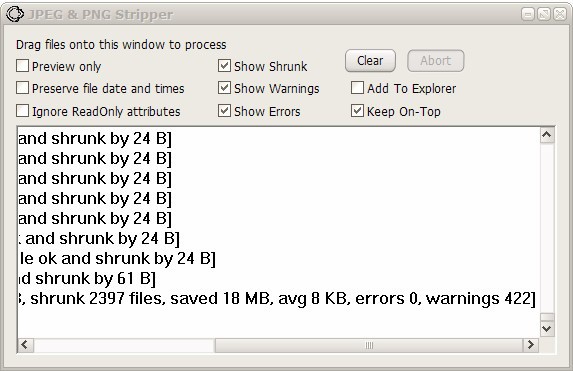 Privacy interested users, those who want to save up disk space or those who simply do not need metadata, may use a software like JPEG & PNG Stripper to remove the metadata from images.

The portable software has a size of 77 Kilobytes. It comes with a graphical user interface; you may drag and drop images or folders that contain images to have them processed by the application.

JPEG & PNG Stripper lists several options at the top that change what the program does.

The program scans all image files automatically that you drop into the interface and remove the metadata from those images when you run it. You may enable preview mode to run a test before you decide on the actual removal of metadata.

JPEG & PNG Stripper shows the file name, status, and size reduction of each individual image, and generates a report in the end that lists the total number of processed images, the total size, and number of files with removed metadata.

A test folder with 6000 images and a size of about 557 Megabytes was reduced by 18 Megabytes using the software program. The program can also be run from the command line which makes it an excellent choice for batch scripts as you may use it to remove metadata of all new image files before moving them to another location.

Note that the clean up process does not affect the image quality. When you use the program, you have a couple of options at the top of the window that you can use to customize the process and output.

You can enable preview mode only, which displays how much space you would free up by running the program, choose to preserve data and time, or ignore read only attributes.

JPEG & PNG Stripper is a useful program for the Windows operating system. It is lightweight and portable, and can process folders with images easily to save disk space or remove personal information from the images.