Sleep Mode, which is also known ans stand-by, deep sleep and suspend, is a low power mode for electronic devices that saves electronic consumption during that time. Wake Up On Standby is a software program for Microsoft Windows that can return the computer from sleep mode into normal mode, perform tasks and make it go back into sleep mode or perform another shutdown operation afterwards.

This tool can be interesting for users who regularly use sleep mode or hibernation instead of turning off their computer completely after work. That's only one possibility though. The software program can also be used to run system updates, system optimization or other tasks that are best executed when no one is accessing the computer.

Wake Up On Standby is a portable utility compatible with Windows XP, Windows Vista and additional former Microsoft operating systems. It uses a five step configuration procedure to exactly time and configure the automatic sleep mode wake up procedure: 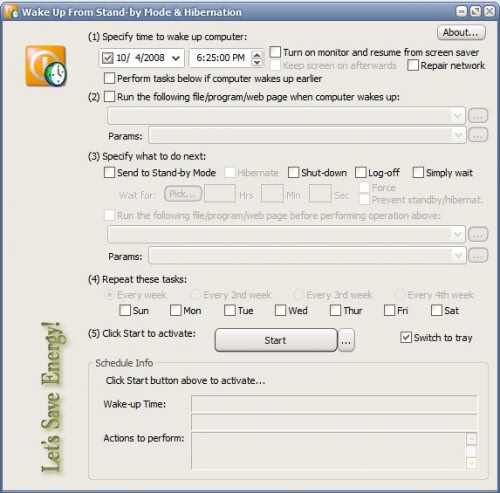 Specifies the exact time the computer should wake up from sleep mode. It contains additional settings like turning on the computer monitor and resuming the screen saver, repairing network and performing the tasks if the computer wakes up early.

Specify programs, batch files or websites that should be executed after waking up the computer from sleep mode automatically.

Specify the action to be performed after finishing the tasks. This includes putting the computer back into sleep mode, shutting down the computer, logging a user off or waiting and doing nothing. Wake Up On Standby can execute another application or batch file before performing the action.

Specify the days and weeks the task should be performed.

The configuration can be saved as a bat file which is useful if Wake Up On Standby should be run with the same settings again or if the settings should be copied to another computer with a similar setup.